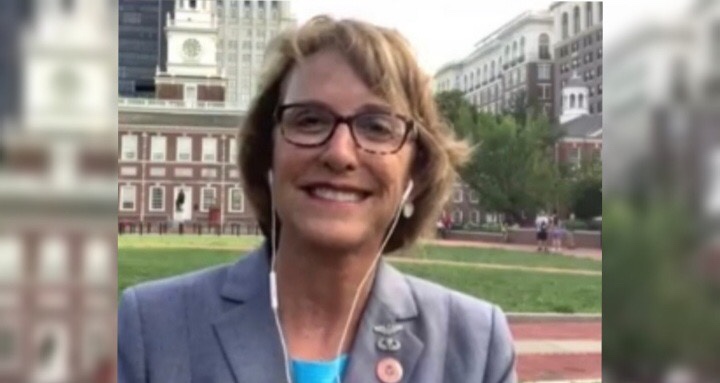 Earlier this week, Senate President Karen Fann had tweeted in response to rumors that an audit report was underway, saying, “Confirming audit companies are preparing the draft report to present to the senate team. Senate team will then review for accuracy and clarity for final report which will be released publicly.”

Arizona State Senator Wendy Rogers (R) on Saturday also weighed in and issued a statement, reassuring Americans that “the draft report should be finished this coming week”– as informed “directly” by Senate President Fann.

Got this directly from [Arizona State Senator President Karen Fann]:

The draft report should be finished this coming week. Then the AZ Senate’s specialized legal team will comb through it. This team includes the auditor, Senate president, Senate Judiciary chair, attorneys, and key Senate staff.

They will verify the draft for accuracy, proof of documentation, and clarity. The AZ Senate will only issue a report that can be proven and is void of possible misinterpretation.

Once these specialized Senate experts fully examine this report, the auditors will then prepare the final report, which will be presented to AZ Senate Judiciary Committee and the public. Continued Below

During an interview earlier in the month on “The Wide Angle” with Brandon Fallon, Senate President Karen Fann warned of Maricopa County forensic audit, “If there was something that was done inappropriately, if it was done criminally, I’m gonna turn it over to the attorney general’s office. We have a department there, a division that deals with election integrity.”

“I’d like to turn it over to them and let them get to the bottom of whatever we find. We will turn a lot of that over,” she indicated.

“If we find that some of our procedures just aren’t working very well, then as a senate body, that’s our job to tweak those laws to make sure things aren’t falling between the cracks, that we’re doing this right. Again, this has been nothing more than just election integrity and answering the questions,” the Arizona senate president added. Continued Below

Meanwhile, in an August 6 letter, the Arizona Attorney General’s office said that it is investigating the Maricopa County Board of Supervisors’ failure to comply with election audit-related subpoenas issued by the state Senate, according to a tweet by State Sen. Kelli Ward.

There is now an official investigation by the Arizona Attorney General into the law-breaking by Maricopa County. It’s a start! #AmericasAudit #Accountability pic.twitter.com/hYiHaCh9JF

If his office finds that the board has violated a provision of state law or the Arizona Constitution by not complying with the subpoenas, Republican Arizona Attorney General Mark Brnovich will file an action in the Arizona State Supreme Court, allowing the board 30 days to resolve the violation, the letter said. The state treasurer will be notified to withhold and redistribute money designated for Maricopa County if the board fails to remedy the violation in time, according to the letter, Business Insider reported.

Arizona State Senator Sonny Borrelli (R) filed a complaint to AG Brnovich under a law allowing any legislator to ask the attorney general to investigate whether a policy, ordinance, regulation or other official action by a city or county violates state law.

The Attorney General’s Office now has until Sept. 2 to determine whether the county did, in fact, break the law. If the office sides with Borrelli, the case will go directly to the Arizona Supreme Court, and if the high court takes the same position, the county will have to either comply with the subpoena or risk losing all of the shared income tax revenue it receives from the state. According to the county, that would be a fiscal hit of nearly $700 million, AZ Mirror reported. Continued Below

Last month, Senate President Karen Fann and Senate Judiciary Chairman Warren Petersen had ordered Maricopa County’s Board of Supervisors to turn over ballot envelopes or ballot envelope images, voter records, and routers or router images. The board was also told to appear at the Arizona State Capitol for a hearing on Aug. 2, as previously reported by The Freedom Times.

Senators also subpoenaed information from Dominion Voting Systems, whose machines Maricopa County leases. Dominion said in a statement to news outlets that it wouldn’t comply with the subpoena, which seeks administrative passwords for the machines, The Epoch Times reported.

Got this directly from @FannKfann

The draft report should be finished this coming week. Then the AZ Senate’s specialized legal team will comb through it. This team includes the auditor, Senate president, Senate Judiciary chair, attorneys, and key Senate staff. (1/3)

prepare the final report, which will be presented to AZ Senate Judiciary Committee and the public. (3/3)

For #AZAudit updates make sure you are getting updates from right people. There are a lot of people saying stuff and pretending to know but they don’t.

Quality is better than speed. It is coming the right way!

Trump Criticizes The GA Election Bill As Being ‘Watered Down’, Suggests ‘Further’ Reforms Are Needed