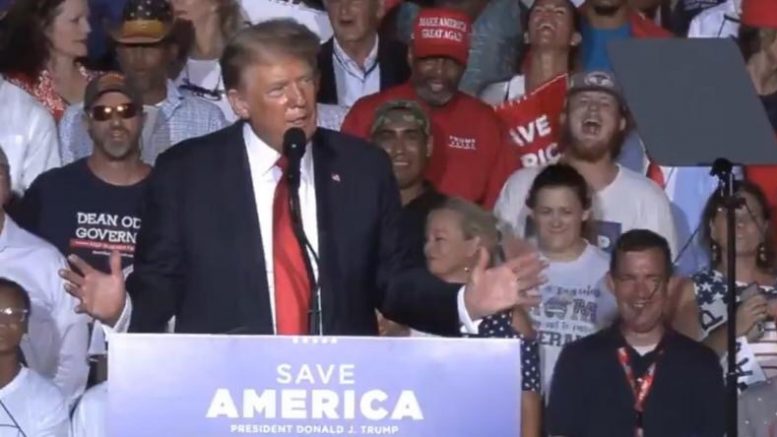 45th President Donald J. Trump, during an enormous “Save America” rally in Cullman, Alabama on Saturday evening, railed against being “woke”, specifically, accusing General Mark Milley of falling into that category.

“The next day the radical left media starts calling. ‘You shouldn’t have walked.’ Instead of saying, I’m proud to walk with my President, not because it’s me, but because it’s the office. But instead of saying that, he wanted to apologize for walking with the President of the United States,” President Trump said, referring to St. John’s Church at Layfette Park.

“And I said, ‘This guy doesn’t have what it takes’. And, you’re seeing that now, because the worst decisions —  I’ve ever seen. Again, that’s why I [played] the Patton,” Trump said, referring to a clip which was played of General Patton’s famous speech at the rally before the 45th President entered the stage.

“You know what woke means? It means you’re a loser. Everything woke, everything woke, it’s true,” he said to a cheering crowd who seemingly appeared to agree with the president’s assessment. Video Below

"Everything woke turns to shit!" pic.twitter.com/w5vVoW7syE

JUST IN: In case you missed it, here’s the opening video of General Patton Part 1. pic.twitter.com/CBtjJgrZPU

JUST IN: In case you missed it, here’s the opening video of General Patton Part 2. pic.twitter.com/xxwzH3zQLe

JUST IN: In case you missed it, here’s the opening video of General Patton Part 3 Final. pic.twitter.com/Ci6nZYJxWo