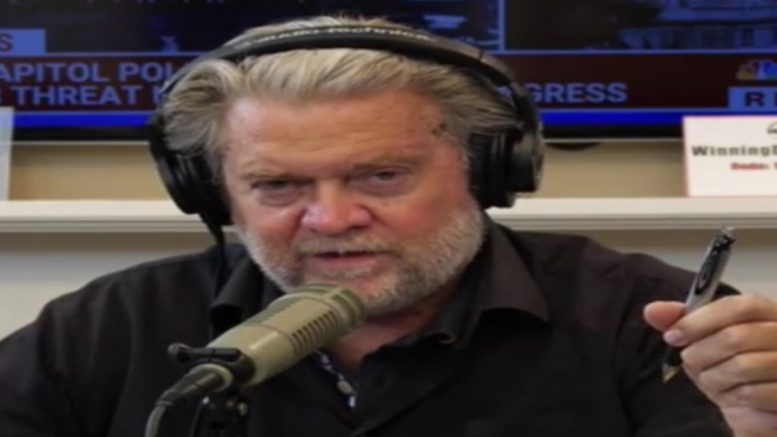 During a Thursday airing of “Bannon’s War Room” former strategic advisor on the Trump 2020 campaign, Boris Epshteyn weighed in on the upcoming Maricopa County, Arizona forensic audit preliminary report which is said to be released soon.

“Remember, state wide in Arizona, the difference is about 10,000 votes. In this report, from what I understand, you’re going to see swings of ballot counts of magnitudes of that of doubled, of tripled that, which is extremely important,” Boris Epshteyn told host Steve Bannon.

“And if that is what we see in there, if that is what comes out, there’s absolutely no way that this election should have been certified for Joe Biden in Arizona,” he said.

Bannon weighed in, predicting, “This is where it is going. This is about decertification. It is not about flipping electors to President Trump. That’s a fight that will come for another day.” Continued Below

“This is about decertification of the electors, because once it’s below 270, or even if you just do one state, all hell is gonna break loose. People are gonna go crazy. Right? People are gonna go, ‘We told you. We told you … this on 3 November’. And now, people have buyers remorse. They’ve got buyers remorse, because this was blocked by the tech oligarchs,” Bannon said. Continued Below

Bannon said big tech suppressed information “around this election in the run-up and then post that”, adding, “What they did to take a sitting president, essentially in a coup, a digital coup, to take him offline and suppress his voice. By the way, everybody needs to understand, it’s all going to come out.”

“Accountability and responsibility are going to be ascertained. And you know how we’re gonna do it? By data, by evidence, by the receipts,” he added. Video Below

57,466 people opened my last email about forming the Election Integrity Caucus. I should have another email update tonight or tomorrow for you all. You are amazing! Our petition is up to 175,000 people! (1 million goal) Sign: https://t.co/VgClJjWTwn