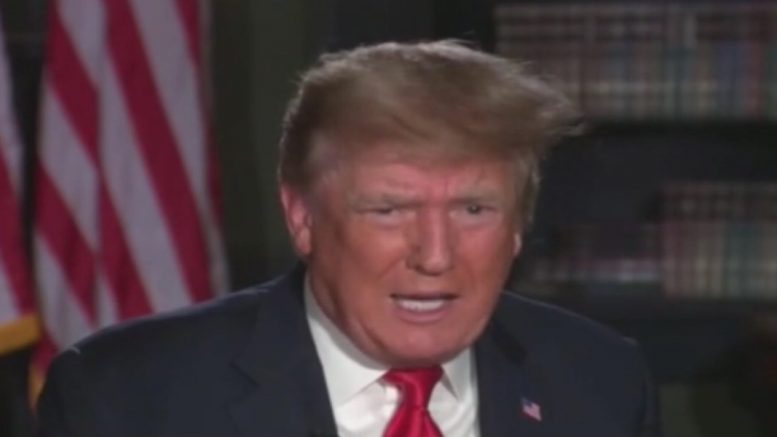 45th President Donald J. Trump issued three statements via email from his “Save America” PAC Wednesday evening regarding the recent chaos which has unfolded under the Biden administration in Afghanistan, declaring in part, “Fake Elections have consequences”.

Trump’s statements come after 78-year-old Biden returned to the White House from Camp David on Monday amid growing pressure to address the nation over the collapse of Afghanistan, saying he stands “squarely behind” his decision to withdraw U.S. troops from Afghanistan after having a presence for 20 years, while placing blame on the Afghan leadership for the country’s plight and claiming that Afghan President Ashraf Ghani had refused advice to negotiate and erroneously insisted Afghan forces would fight, as previously reported by The Freedom Times.

While reading prepared remarks on a teleprompter, Biden said on Monday, “I stand squarely behind my decision. After 20 years, I’ve learned the hard way, that there was never a good time to withdraw U.S. forces.”

Democrat career politician Joe Biden also refused to take responsibility over the events that unfolded and went on to blame former President Trump for his 2020 agreement with the Taliban, which would have seen a “conditions based” withdrawal of U.S. troops from the country by May 1, 2021.

Trump reacted to Joe Biden’s remarks in a Monday statement via email, saying, “It’s not that we left Afghanistan. It’s the grossly incompetent way we left!” Continued Below

On Wednesday evening, Trump issued a statement saying, “This could be—Afghanistan—another Dunkirk situation!”

Former CIA Director David Petraeus also called the chaotic evacuation of Americans and Afghan civilians from Afghanistan a “Dunkirk moment” — as Biden administration officials revealed they were unaware of the exact number of US civilians in the nation now under Taliban control.

“This is a Dunkirk moment and our decisions created it. We need to acknowledge that. And we should now act as if we do recognize the catastrophe that we have created for Afghans who supported us,” Petraeus, who commanded US forces in Afghanistan during the Obama administration, said in an interview with the Cipher Brief on Tuesday. Continued Below

In a second email statement on Wednesday, the 45th President declared, “Fake Elections have consequences, just look at the horror of Afghanistan coupled with the massive incompetence at our Southern Border!”

“Biden did this to celebrate on September 11th when in actuality the celebration is our enemies and the fact that we already have the Taliban flag flying over our Obama-Biden built $1 Billion U.S. Embassy in Kabul,” President Trump also said in a third email statement on Wednesday evening.

The Taliban flag flying over the Presidential Palace in Kabul. Afghanistan has fallen. pic.twitter.com/FXgsgCdq8b

“The situation is absolutely heartbreaking. It is tragic…This is a Dunkirk moment or, perhaps, a Saigon moment.” pic.twitter.com/Yg1gZr38t2 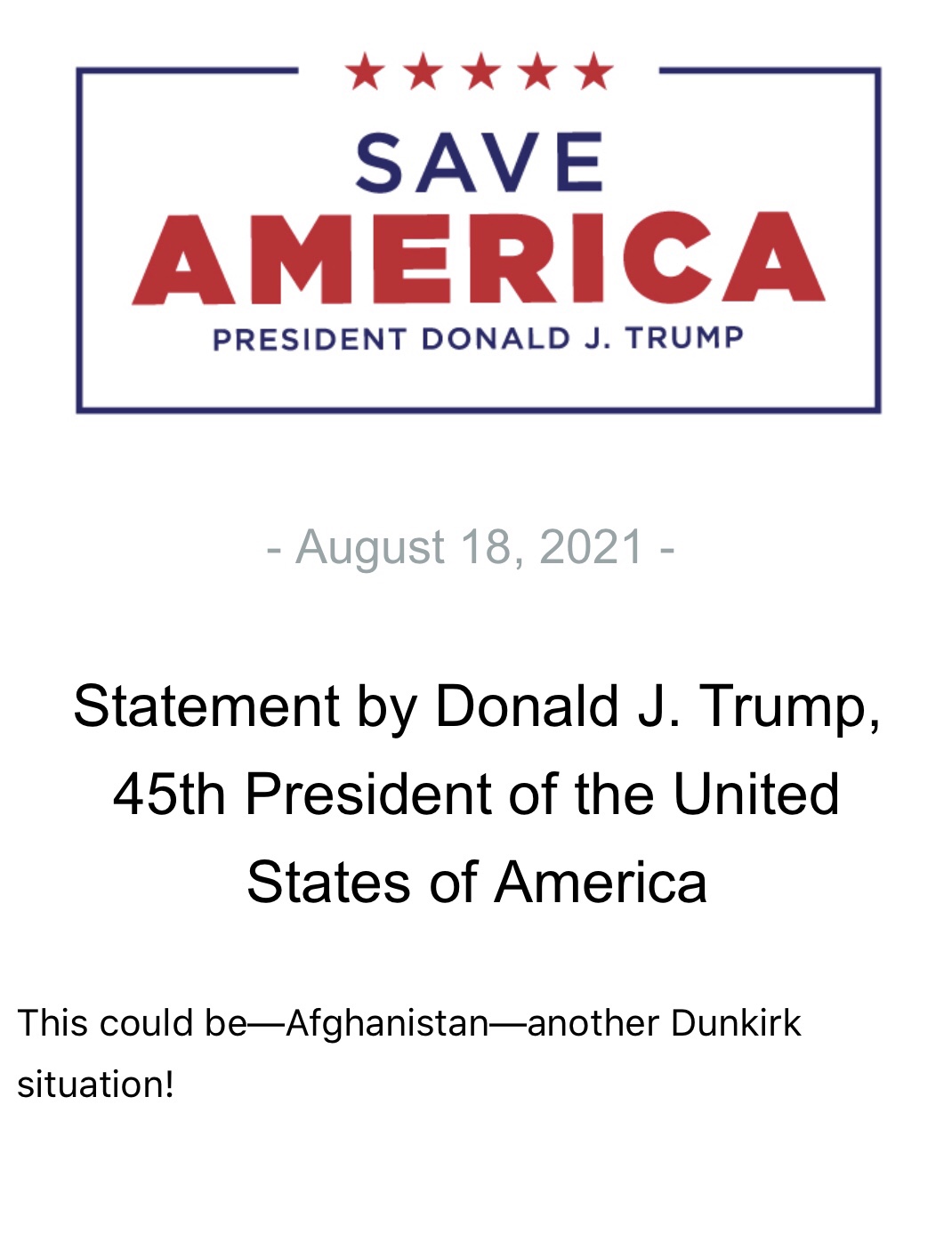 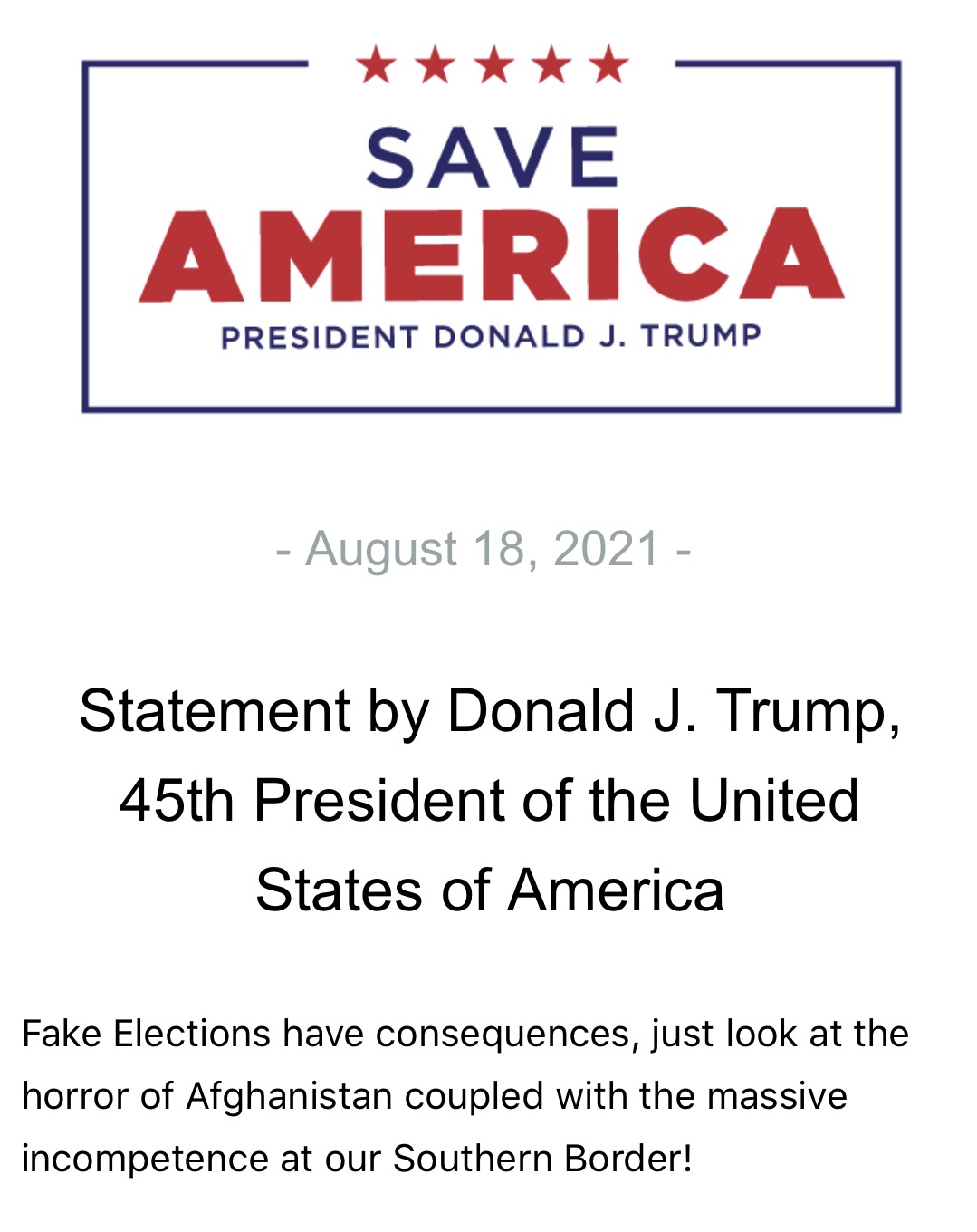 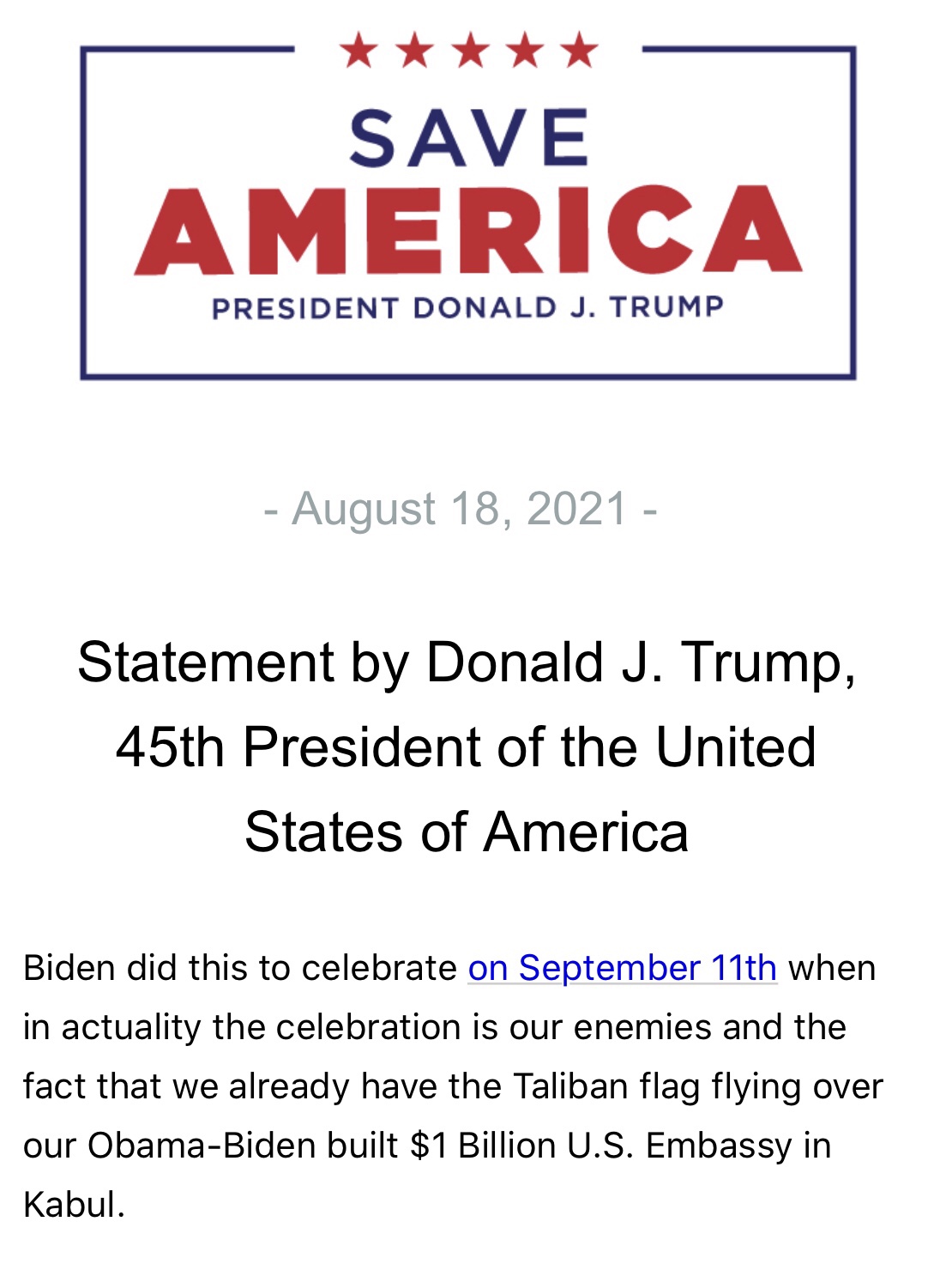