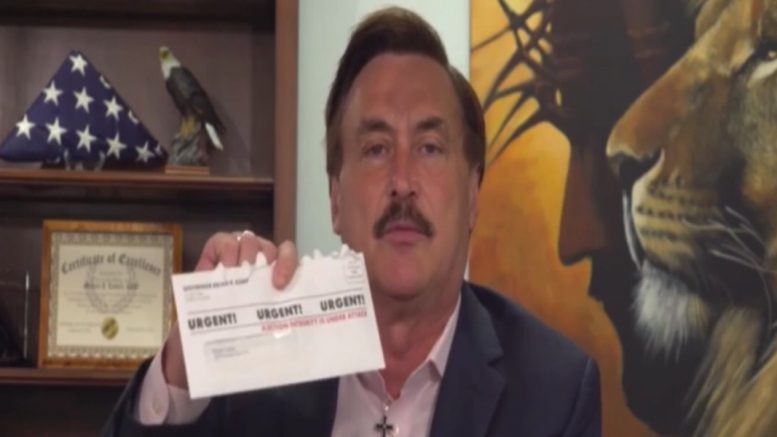 MyPillow CEO Mike Lindell, during a Thursday interview with host Steve Bannon on “War Room”, dropped a warning about Georgia Governor Brian Kemp regarding the 2020 November general election, alleging that Kemp’s fundraising efforts are “part of the cover-up”.

“I want to show everybody this. This is what politics have come to everybody,” Lindell said as he held up a piece of mail he had received from Kemp.

“This came this morning to me [from] Governor Brian Kemp,” Lindell said while holding up mail he received.

“Urgent! Urgent! Urgent! Read all about it. Election integrity is under attack,” he read from the outside of the envelope addressed to him. “What? I had to quick[ly] open it. You’re telling me, Brian, really?”

“And Brian says, ‘Michael, can you help us with your donation today? The far left has weaponized and [going] to strike down Georgia’s election integrity act'”, Lindell read aloud.

Steve Bannon stopped Lindell in his tracks, asking, “Whoa! Whoa! Hang on. You’re telling me Brian Kemp is sending out mailers to raise money because of election integrity? Brian Kemp? The guy who allowed this all to happen?” Continued Below

Lindell responded: “Brian Kemp. You know, unreal. I’m gonna say this now: Brian Kemp, this is part of the cover-up, everybody. When you have people like [AZ Gov.] Doug Ducey, Brian Kemp, and Brad Raffensperger– how they have covered up, obstructed the audits, the truth that really happened with these machines and this attack by China.”

“Now what is Brian doing with garbage like this?” Lindell wondered. “Not only is he trying to monetize himself, which he’s done since he got in office. … Remember he bought, I think, it was 107 million dollars worth of Dominion machines in 2019 of taxpayer money down there in Georgia.”

Lindell said over the last few months Kemp has “been all about election integrity”, adding, “When I was kicked out the the governors conference, Brian Kemp is on that election integrity committee. I mean, he’s covering up for the machines, everybody.” Video Below

“He doesn’t care about the election integrity. … It’s a big cover-up by Brian. Brian had a chance in Georgia to do the right thing, leading up to the runoff, … to open up the audits. He shoved it over on Raffensperger. They’re all in cahoots down there,” Lindell asserted.

“What shameful, Brian–you’re trying to pull. If he’s sending me things, think what he’s doing to the people. We’re on to you Brian. This is urgent, urgent, urgent. Boy, you’re doing a lot for the people collecting money. It should make enough money for your big machine sale back in [20]19?” he sarcastically asked.