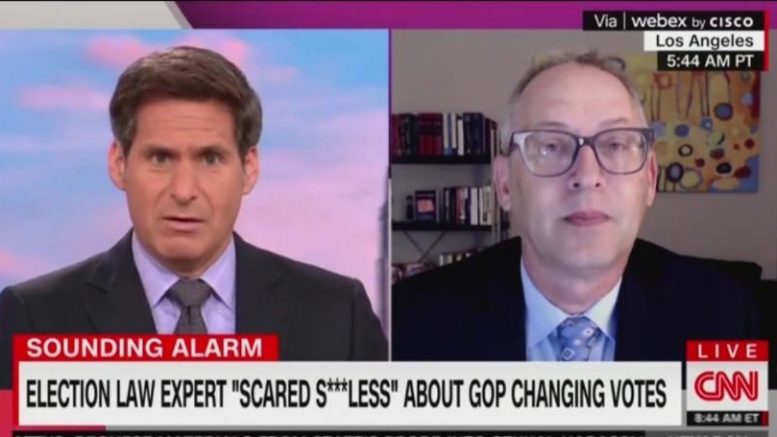 Richard Hasen, a law professor at the University of California, Irvine, and one of the country’s foremost election-law experts, told me, “I’m scared shitless.” Referring to the array of new laws passed by Republican state legislatures since the 2020 election, he said, “It’s not just about voter suppression. What I’m really worried about is election subversion. Election officials are being put in place who will mess with the count,” reported Jane Mayer from the left-leaning publication The New Yorker.

Following up on Hasen’s comment, host John Berman of CNN’s “New Day”, asked the law professor about his “colorful term” he had used in The New Yorker to “describe how scared [he] is about upcoming elections”.

“How scared are you about elections going forward?” CNN’s John Berman asked Richard Hasen while giving the greenlight to the law professor to continue to use the “colorful term” on the Democratic cable network.

“Well I never expected to say that I’d be scared sh*tless on CNN, but that’s how I feel,” Hasen said. “We dodged a bullet in 2020, but the way things are lining up, I’m very concerned about our elections going forward, especially 2024 and the possibility that we’re not going to have an election where the results, the official results, reflect what voters actually want.”

Asked why he is concerned “people would just throw out legitimate results”, Hasen claimed, “If you look at the kind of arguments that Donald Trump was making, they were not just the false claims of voter fraud– the big lie that’s gotten so much attention. He has asked for state legislatures to override the will of the people. … He wanted to have legislatures in Georgia, in Michigan, Wisconsin, [and] Arizona, change the election results.”

“Now things are lining up with those who had the courage to stand up to Trump, like Brad Raffensperber, the secretary of state of Georgia. Those people have been pushed out or pushed to the side, or censured by Republicans, and they’re being replaced by people and being replaced with laws that are going to make it easier to subvert the will of the people if that’s what the political pressure puts on them to make them do,” Hasen alleged. Continued Below

“So you can have a state pass a law that says ‘we’re not gonna have an election for president’. That’s right there in Article II. I think that would be politically unpopular, but this is kind of getting the same way in the back door, where there’s been at least in Arizona, a proposal that if the state legislatures agree the election was run fairly, it could throw out the election results, and it could decide for itself, which candidate is gonna get the state’s electrets,” he explained.

“It hasn’t happened yet,” he conceded. “But the fact that this is even on the table, shows you the really anti-small democratic movement we’re seeing in many parts of the country.” Video Below