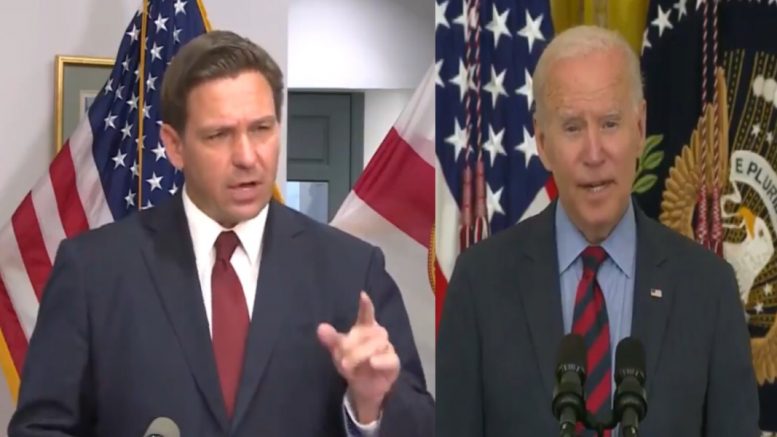 78-year-old Joe Biden criticized Florida Governor Ron DeSantis (R) and Texas Governor Greg Abbott (R) during a speech on Tuesday, in which he called reported covid outbreaks “a pandemic of the unvaccinated” and some states’ responses “disappointing.”

Joe Biden called bans against mask and vaccine mandates the “worst of all,” both of which DeSantis has issued. When asked by name, Biden criticized Governors DeSantis and Abbott for making personal decisions detrimental to public health,” Florida Politics reported.

Pres Biden: "I say to these governors, please help. And if you're not going to help at least get out of the way of people who are trying to do the right thing. Use your power to save lives." pic.twitter.com/fbks5dm13H

Biden’s speech followed a briefing from White House Press Secretary Jen Psaki in which she similarly derided DeSantis when asked by reporters.

“But if you aren’t going to help, if you aren’t going to abide by public health guidance, then get out of the way and let people do the right thing to lead in their communities, whether they are teachers, university leaders, private sector leaders or others who are trying to save lives,” Psaki said, appearing to mimic the daily Democratic talking point.

Psaki just told DeSantis he needs to ‘get out of the way’ on the Delta wave pic.twitter.com/X60a9GHa65

Florida Governor Ron DeSantis responded to Biden’s criticism on Wednesday, telling the 78-year-old Democrat career politician that he does not “want to hear a blip about Covid from you” until the southern border is secure.

“Joe Biden has taken to himself to try to single out Florida over Covid. This is a guy who ran for president saying he was gonna ‘shut down the virus’, and what has he done? He’s imported more viruses around the world by having a wide open southern border,” DeSantis explained.

“You have hundreds of thousands of people pouring across every month. It’s not just from Mexico, in fact, it’s rarely from Mexico. You have over a hundred different countries where people are pouring through. Not only are they letting them through, they’re then farming them out all across our communities, across this country– putting them on planes, … busses. Do you think they’re being worried about Covid for that? Of course not,” he said. Video Below

DeSantis suggested the Biden administration is “facilitating” the “various variants out there”, adding, “[Biden’s] not shutting down the virus, he’s helping to facilitate it in our country.”

“We can either have a free society or we can have a biomedical state. And I can tell you, Florida, we’re a free state,” DeSantis expressed. “People are gonna be free to choose to make their own decisions about themselves, about their families, … kids education, and about putting food on the table. And Joe Biden suggests that if you don’t do lock down policies, then you should ‘get out of the way'”.

“Let me tell you this: If you’re coming after the rights of parents in Florida, I’m standing in your way. I’m not gonna let you get away with it. … If you’re trying to restrict people, impose mandates, if you’re trying to ruin their jobs and their livelihoods and their small business, if you are trying to lock people down, I am standing in your way, and I’m standing for the people of Florida. So, why don’t you do your job? Why don’t you get this border secure? And until you do that, I don’t want to hear a blip about Covid from you!” he declared. [Emphasis added].

Gov. DeSantis takes a massive wrecking ball to Biden's absurd criticism on his handling of COVID.

WATCH: 100 Miles Of Southern Border Wall Materials ‘Sitting Out In The Open, Baking In The Sun & Rusting’

In A Striking Move, Romney Urges An End To ‘Partisan Bickering’ To Resolve The Border Crisis