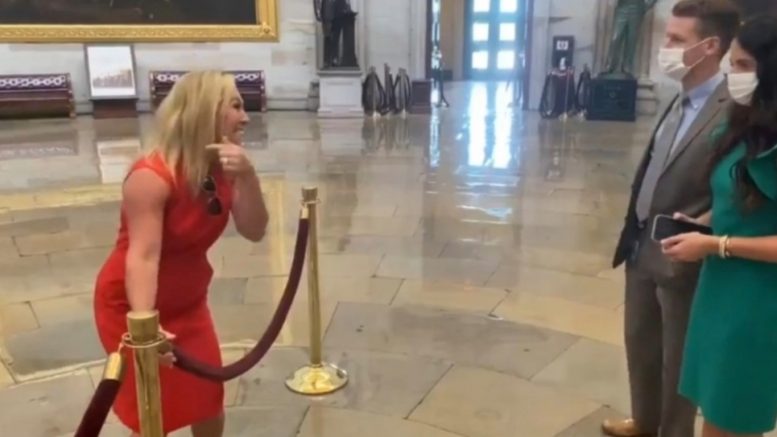 A new skit featuring Rep. Marjorie Taylor Greene pokes fun at mask requirements reinstalled for the House side of the Capitol Building.

As reported by NBC, “attending physician for Congress, Dr. Brian Monahan, said in an alert to House members Tuesday that people are required to wear masks again inside the chamber and office buildings and in committee meetings.”

A U.S. Capitol Police bulletin released soon after warned that staff members and visitors could be arrested if they don’t comply with the new rules. However, Capitol Police later clarified in a statement that “there is no reason it should ever come to someone being arrested.”

In a recently uploaded video, Rep. Greene is seen directing two masked staffers towards the Senate side of the Capitol Building.

“Hey, over here there’s no Covid. You won’t get arrested if you take your mask off. Would you like to come in?” Greene asks. “That’s the House side where Nancy Pelosi will have you arrested,” she says while pointing to the the House side.

“This is the Senate side,” says Rep. Greene as she points to the opposite side of the building and proceeds to let them in. The pair of staffers then take their masks off.