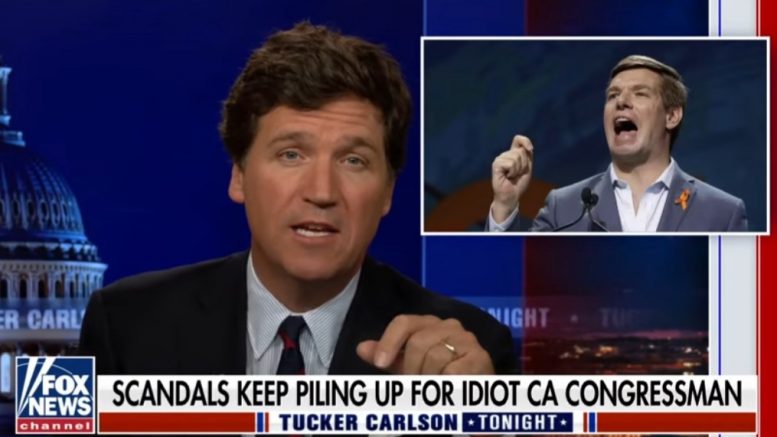 “Campaign finance records obtained by Fox News show that Eric Swalwell spent thousands in campaign contributions — that’s money he raised to run for office… money he is prohibited by federal law from spending on himself — he spent that money on expenses that seem suspiciously like personal luxeries,” Tucker Carlson reported on his Tuesday night program.

“Those would include limo rides, booze deliveries, high-end steakhouses. And some of those expenditures appear very clearly to be for personal use. Again, that’s illegal,” Tucker added as he exposed Rep. Swalwell’s suspicious spending.

Related Article: McCarthy Reacts After FBI Briefing On Swalwell’s Ties To Alleged Spy: “He Should Not Be On Intel”

“Most interestingly on the disclosure form, more than $20,000 of Eric Swalwell’s campaign expenditures went to the Ritz-Carlton Hotel in Half Moon Bay, California,” Tucker revealed. “Now weirdly, maybe not so weirdly, Eric Swalwell’s wife is an executive at that very hotel.”