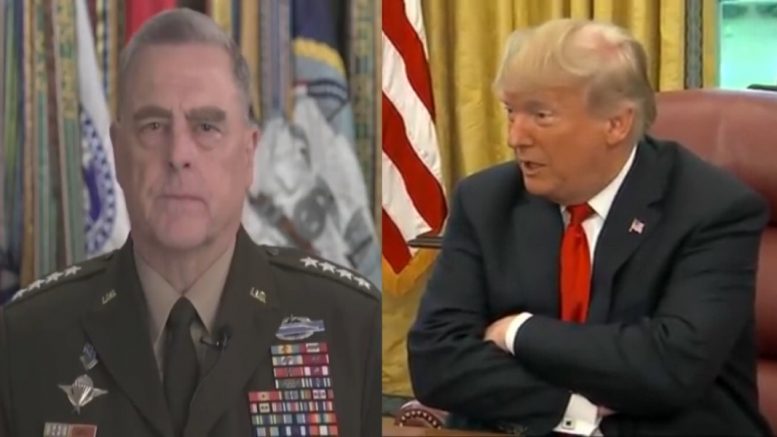 45th President Donald Trump issued a statement via email from his “Save America” PAC on Thursday, blasting Gen. Mark Milley, chairman of the Joint Chiefs of Staff, after excerpts from a book reportedly claimed that Milley was concerned over a potential coup attempt in the aftermath of the 2020 election.

Milley said he felt he needed to be “on guard” after Joe Biden allegedly won the election, according to excerpts from “I Alone Can Fix It“, a book by two Washington Post reporters, Carol Leonnig and Philip Rucker, which is set for release Tuesday.

The book claims that Milley and other military officials allegedly feared President Trump would attempt a coup to stay in power and considered resigning.

“This is a Reichstag moment,” the Washington Post authors wrote, allegedly citing Milley. “The gospel of the Fuhrer.”

President Trump reacted in a lengthy email statement Thursday, informing Americans that he is “not into coups!” Continued Below

Despite massive Voter Fraud and Irregularities during the 2020 Presidential Election Scam, that we are now seeing play out in very big and important States, I never threatened, or spoke about, to anyone, a coup of our Government. So ridiculous!

Sorry to inform you, but an Election is my form of “coup,” and if I was going to do a coup, one of the last people I would want to do it with is General Mark Milley. He got his job only because the world’s most overrated general, James Mattis, could not stand him, had no respect for him, and would not recommend him.

To me the fact that Mattis didn’t like him, just like Obama didn’t like him and actually fired Milley, was a good thing, not a bad thing. I often act counter to people’s advice who I don’t respect. Continued Below

In any event, I lost respect for Milley when we walked together to St. John’s Church (which was still smoldering from a Radical Left fire set the day before), side by side, a walk that has now been proven to be totally appropriate—and the following day Milley choked like a dog in front of the Fake News when they told him they thought he should not have been walking with the President, which turned out to be incorrect.

He apologized profusely, making it a big story, instead of saying I am proud to walk with and protect the President of the United States. Had he said that, it would have all been over, no big deal, but I saw at that moment he had no courage or skill, certainly not the type of person I would be talking “coup” with. I’m not into coups!

In fact, around the same time Milley, in a conversation, was an advocate of changing all of the names of our Military Forts and Bases. I realized then, also, he was a much different person than I had hoped. I said to him, “spend more time thinking about China and Russia, and less time on being politically correct.”

But never during my Administration did Milley display what he is showing now. He was not “woke.” Actually, I don’t believe he ever was, but the way I look at Milley, he’s just a better politician than a general, trying to curry favor with the Radical Left and the absolute crazy people espousing a philosophy which will destroy our Country! 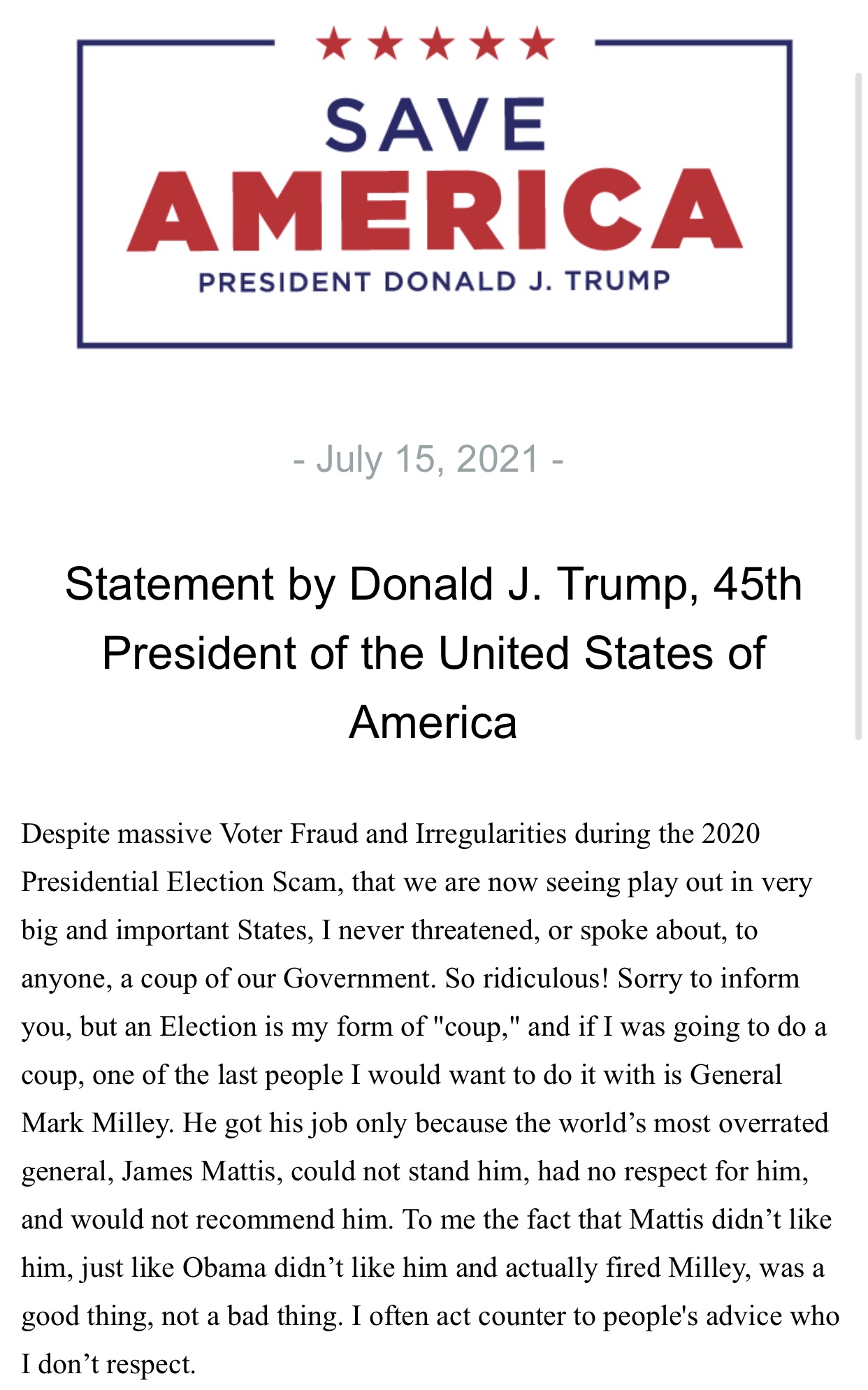 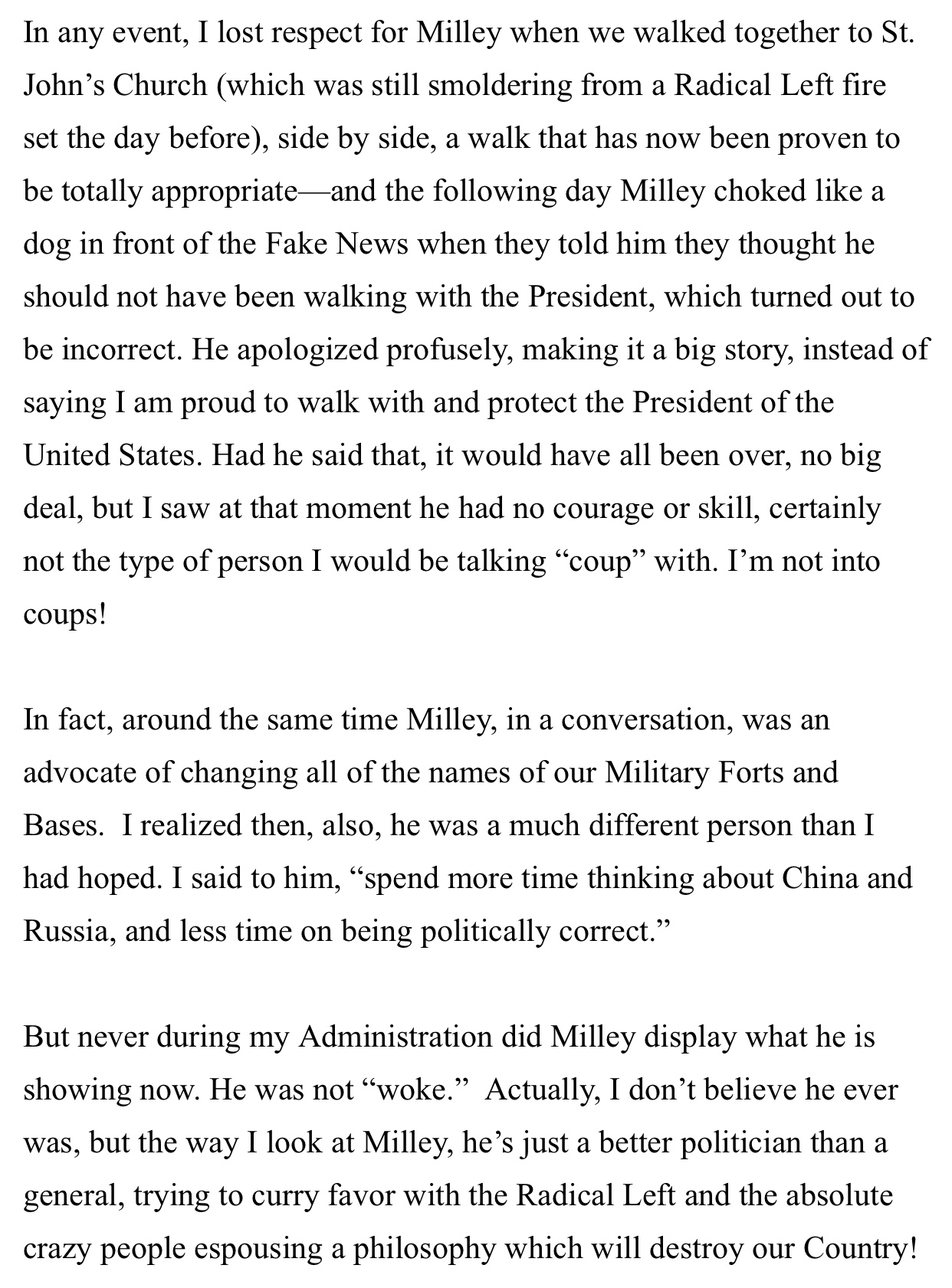 (Related: Trump Says He ‘Turned Down Two Book Deals’ But Is ‘Working On A Much More Important Project Right Now!’)