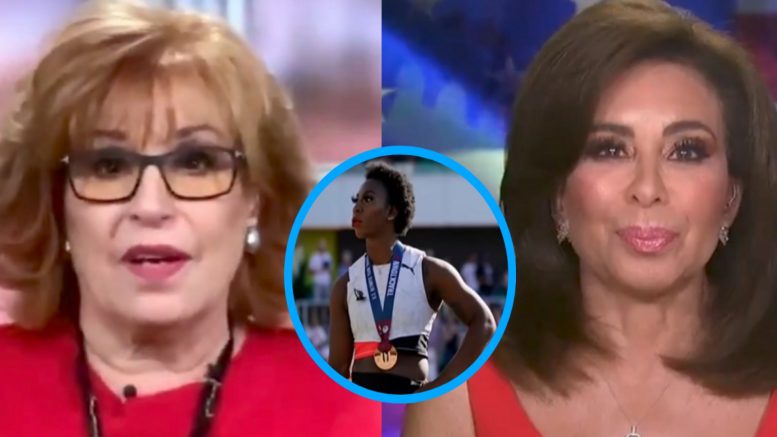 Judge Jeanine Pirro lashed out at Joy Behar after The View co-host suggested that Olympic hammer thrower Gwen Berry was ‘doing her patriotic duty’ and was ‘not hurting anybody’ when she decided to turn her back to the American flag as the national anthem was being played after placing third at the Olympic trials.

“Protest is the very definition of patriotism. It basicially is the basis of the country,” Behar said on Tuesday’s airing of ABC’s The View. “She’s basically doing her patriotic duty by saying ‘I am making point here.’ That’s all she’s doing. She’s not hurting anybody.”

Related Article: Judge Jeanine Fires Back At Joy Behar: “Instead Of Sitting On Your Butt With Your Friends, Pontificating… Do Something That Matters”

In response, Judge Jeanine stated as follows on her Saturday night program:

Joy, she’s not hurting anybody? She’s hurting every man and woman who’s blood was spilled for that flag, including patriotic Black men and women who chose to enlist and chose to fight for what you find so repulsive.

She is hurting America on the international stage, where other countries laugh at the disrespect and downright hatred people like her have for our National Anthem and our flag, allowing them to then laugh at us and ridicule us when they are so much worse.

But most of all, she is teaching young children for who she is a role model that it is okay to hate America and it is okay to insult her on the world stage. Video Below

"Tomorrow we celebrate Independence Day… sadly in our country it is far too common to see people who don't respect our National Anthem and our flag."- Judge Jeanine on the importance of respecting our flag and our country especially on this holiday weekend. pic.twitter.com/IsL1Tue7cu