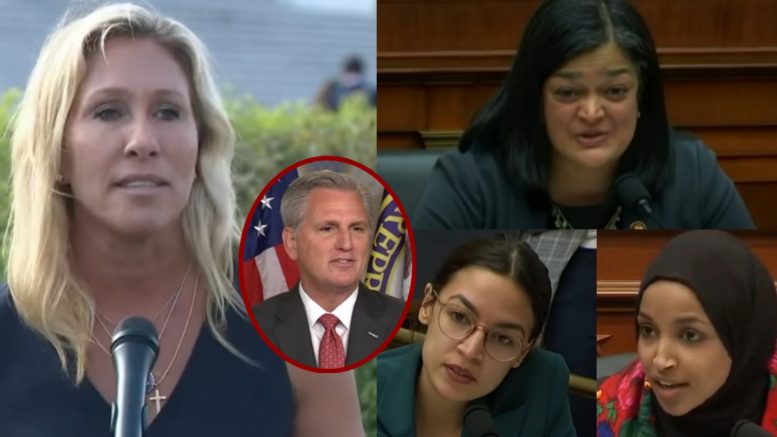 In a letter sent to McCarthy, Democrats argue that Rep. Greene’s actions have reached an “unacceptable level” and “could lead to violence against members of Congress.”

The group chose to take this step after Greene spoke as a warmup act for former President Donald Trump at his rally in Ohio last weekend, an aide familiar with the letter’s origins told CNN. Greene, without evidence, repeatedly claimed Trump won the 2020 election and viciously attacked Democratic Rep. Alexandria Ocasio-Cortez of New York.

Greene described Ocasio-Cortez as the “little communist from New York City,” and nodded in agreement with the crowd when they started shouting “lock her up.”

Ocasio-Cortez has signed on to the letter, which is led by Rep. Pramila Jayapal of Washington and is signed by a diverse list of House Democrats, including fellow progressives like Reps. Cori Bush of Missouri and Ilhan Omar of Minnesota and more moderate members like Reps. Gerald Connolly of Virginia and Brendan Boyle of Pennsylvania.

…”Rep. Greene’s conduct does not comport with what we expect from a member of the House of Representatives,” the letter reads. “Moreover, we are extremely concerned that her conduct is creating an unsafe work environment for members, and that her actions could lead to violence against members of Congress.”

In response, Rep. Greene issued the following response via Twitter:

For the last 6 years, Democrats have called Republicans: Nazis, Fascists, White Supremacists, & Enemies of the State.

It’s absurd Democrats accuse me of creating an environment of harassment for speaking at a Trump rally & defining them as who they are: Communists.

…The truth is Cori Bush harassed me and it’s on video, then lied to get a bigger office. Marie Newperson harassed me with a taunting video about her adult son. The Democrat delegate from Guam harassed me by using the national guard and marched on my office. Continued Below

I receive constant harassment in public caused by the Democrat lies and promoted by the media.

Democrats singled me out and kicked me off committees for doing nothing wrong, and the death threats haven’t stopped since.

And now the witch hunt continues in an attempt to overturn my 2020 election and kick me out of Congress.