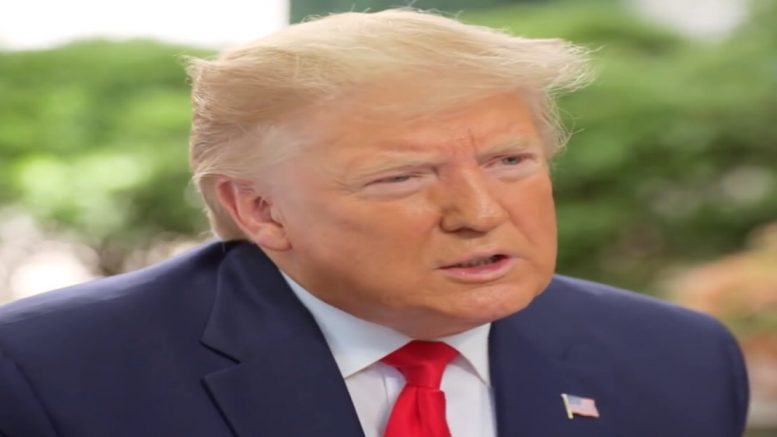 Trump’s statement came after Manhattan District Attorney Cy Vance’s team reportedly has told lawyers for Trump that they will proceed with charges unless persuaded otherwise today, according to The Washington Post. However, Vance has indicated he does not currently plan to charge the Trump Organization with crimes related to allegations of “hush money” payments and real estate value manipulations, according to Ronald Fischetti, a New York attorney who represents the former president.

Vance has spent years investigating the Trump Organization. His team went to the Supreme Court to get authorization to seize Trump’s personal tax returns — meaning his investigators know more than just about anyone about the former president’s finances. The Washington Post reported last month that Vance’s office convened a grand jury to decide whether or not to bring charges against the Trump Organization or Trump himself, POLITICO reported.

Radical Left New York City and State Prosecutors, who have let murderers, rapists, drug dealers, and all other forms of crime skyrocket to record levels, and who have just announced that they will be releasing hundreds of people involved in violent crime back onto the streets without retribution of any kind, are rude, nasty, and totally biased in the way they are treating lawyers, representatives, and some of the wonderful long-term employees and people within the Trump Organization.

After hundreds of subpoenas, over 3 million pages of documents, 4 years of searching, dozens and dozens of interviews, and millions of dollars of taxpayer funds wasted, they continue to be “in search of a crime” and will do anything to frighten people into making up the stories or lies that they want, but have been totally unable to get.

In an unprecedented move, they retained an outside “Never Trumper” lawyer from a Trump-hating law firm to work on the case. It is a continuation of the greatest Witch Hunt of all time. Continued Below

Now they are issuing ultimatums, working in close conjunction with the Washington, D.C. hacks who have been investigating me from the day I came down the escalator in Trump Tower, but who have failed. In fact, the guilty parties were these prosecutors’ partners in crime, the Radical Left Democrats and friends.

They will do anything to stop the MAGA movement (and me), even if it involves prosecutorial misconduct and harassment of a political opponent, which they are using at levels rarely seen before. They leak, they lie, and they campaign based on information that has already been gone through in other of the many investigations I have put up with.

Now they just leaked that we were given one day, today, to make our case about things that are standard practice throughout the U.S. business community, and in no way a crime. They also know that no matter how strong our case, they will work hard to embarrass us and the Republican Party. Continued Below

Having politically motivated prosecutors, people who actually got elected because they will “get Donald Trump,” is a very dangerous thing for our Country. In the end, people will not stand for it. Remember, if they can do this to me, they can do it to anyone!

Why would anyone bring their company to New York, or even stay in New York, knowing these Radical Left Democrats would willingly target their company if viewed as a political opponent? It is devastating for New York!

These Witch Hunters are relentlessly seeking to destroy a reputation of a President who has done a great job for this Country, including tax and regulation cuts, Border control, rebuilding the Military, and developing the vaccine in record time—thereby saving our Country, and far beyond.

Washington, D.C. and ultimately, the U.S. Supreme Court, should finally stop these vicious, angry, and highly partisan prosecutors. They are a disgrace to our Nation! Continued Below

According to Fischetti, members of Vance’s team said they were considering bringing charges against the Trump Organization and its individual employees related to alleged failures to pay taxes on corporate benefits and perks. It has been widely reported that those perks included cars and apartments and appear to only involve a small number of executives.

“We asked, ‘Is there anything else?’” Fischetti told POLITICO. “They said, ‘No. … It’s crazy that that’s all they had”.

When asked if the meeting touched on allegations made by Trump’s former lawyer Michael Cohen and by adult film star and director Stormy Daniels, Fischetti replied, “Nothing. Not a word on that.” 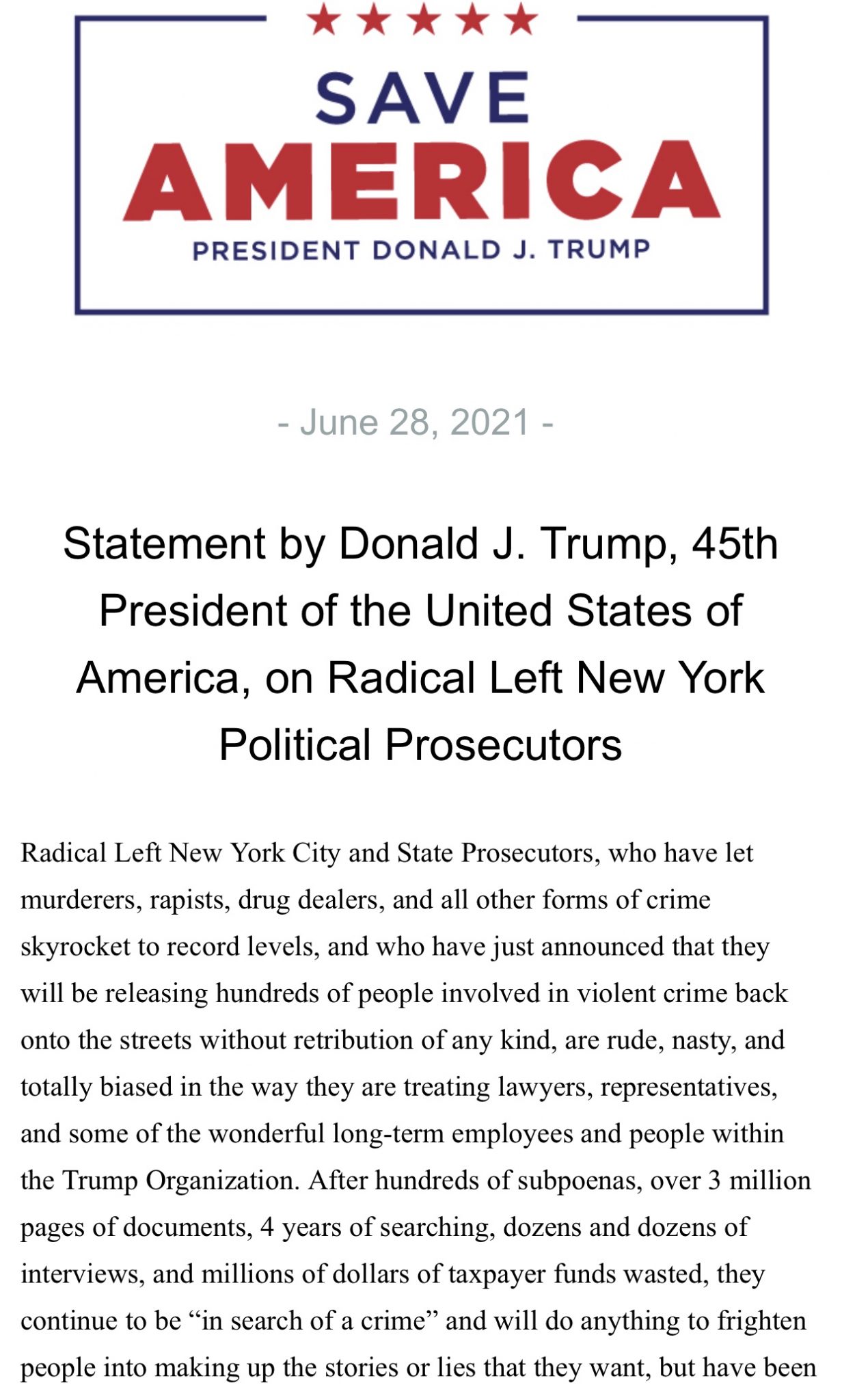 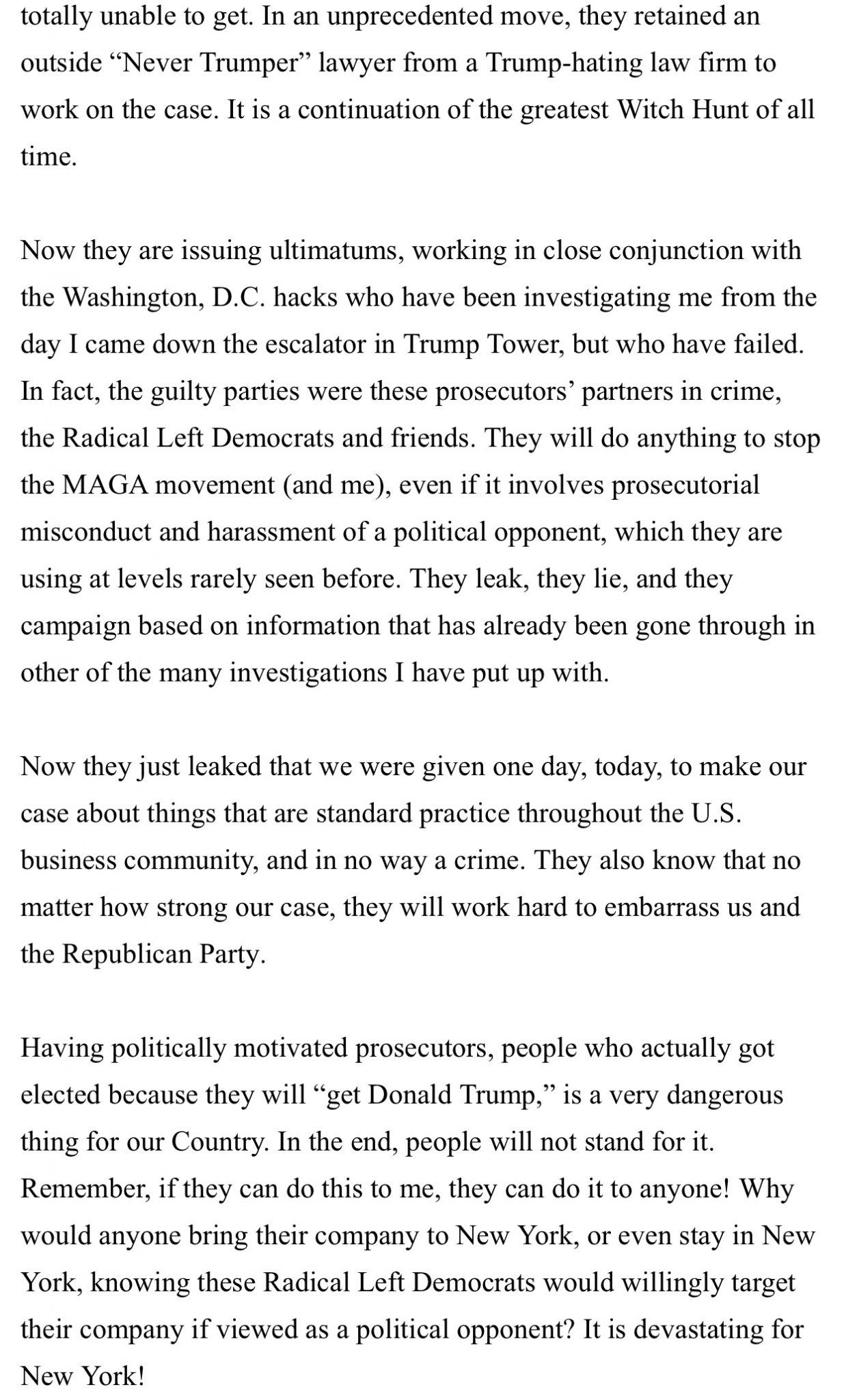 Serious question – where does President Trump go for his apology? He, his family, his friends, his company, have all been smeared and maligned for months!!!

Re-upping this from yesterday…another Democrat Witch Hunt goes down in flames.

What’s next, blaming President Trump for the heatwave in Portland and Seattle??? https://t.co/5POUUePwr7