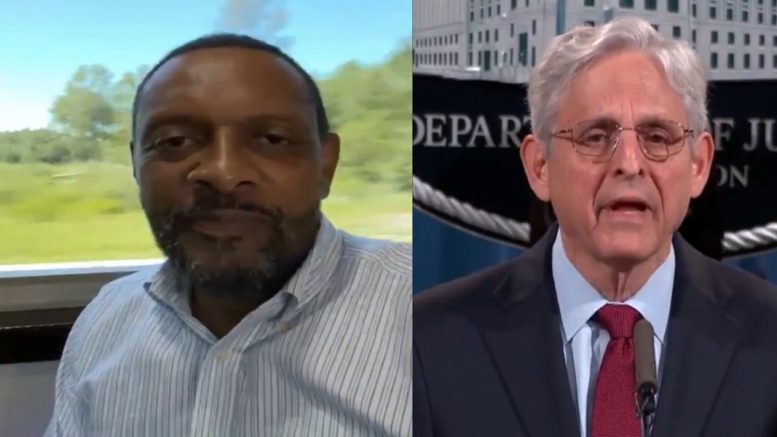 The Department of Justice (DOJ) on Friday filed a lawsuit against Georgia over the state’s recently passed voting laws and it was announced by Attorney General Merrick Garland during a press conference. Garland alleged the laws are a violation of the federal Voting Rights Act’s protections for minority voters, as previously reported by The Freedom Times.

Vernon Jones, who is a candidate in the Republican primary for the 2022 Georgia gubernatorial election against incumbent Brian Kemp, reacted to Garland’s announcement, saying, in part, on Twitter Friday, “They think black people are too damn dumb to secure a Voter ID and properly vote. This is racism at its worst.”

The attorney general, however, did not provide more details about the claim that the law violates minority groups’ rights during the news conference. Continued Below

Vernon Jones, in a video message posted on Twitter Friday, fired back at Joe Biden and the DOJ, saying, “I want to talk about what Jim Crow Joe Biden just did with his Justice Department– having Attorney General Garland to come and investigate Georgia election laws because they don’t Black people have the damn sense or can afford a free photo ID. That is so disrespectful to the entire Black race to even think that.”

“If he wants to investigate something in Georgia, he should investigate how Stacey’s [Abrams] law was used over state law in our elections. That’s right– using electronic signature verification and the so-called drop-off boxes that were used to harvest votes. Why doesn’t he investigate that?” Jones wondered.

“And by the way, Brian Kemp, you need to get on the stick and do this 159 county forensic audit right now so you can show the real fraud here, and stop being afraid of Stacey Abrams and working with Joe Biden’s administration to stonewall it. Again, there’s a dead cat on the end of this line, but I’m gonna fight the rest of my days on election integrity, not only in Georgia, but this country,” he added. Video Below

Attorney General Garland: "Today, the Department of Justice is suing the state of Georgia."

Joe Biden’s DOJ is suing the state of Georgia because they think black people are too damn dumb to secure a Voter ID and properly vote.

This is racism at its worst. pic.twitter.com/62V2EIprZU

If the feds want to sue Georgia for securing our elections, I want to tell them to bring it on.

We will never apologize for seeking to restore the integrity of our elections. Period.

He further pointed out:

While the Biden DOJ lawsuit is meritless, if @BrianKempGA had fought to secure our elections while President Trump was still in office, not just when he was fighting to be re-elected, we likely wouldn’t be dealing with this today.

(Related: Trump Reacts As The DOJ Announces They’re Suing Georgia: “It Should Be The Other Way Around!”)