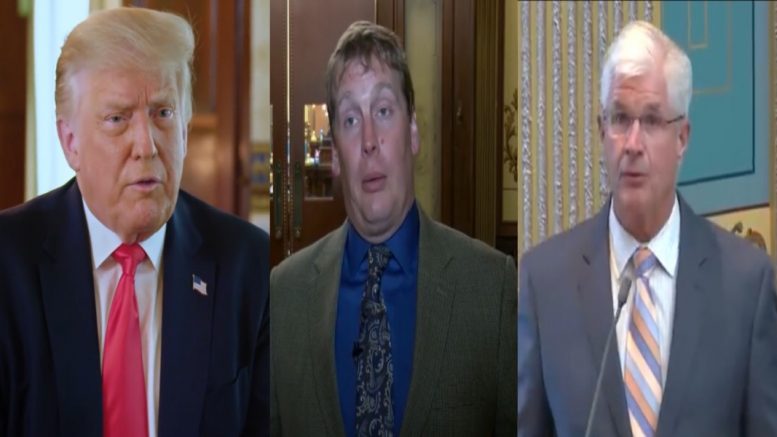 In a highly anticipated report released Wednesday, the Republican-led Michigan Senate Oversight Committee rebutted former President Donald Trump’s voter fraud claims, debunking allegations of malfeasance in the state’s election last fall and affirming that Joe Biden was victorious. The report is the product of an eight-month inquiry and concludes there was no basis or evidence to support the Trump campaign’s repeated claims that the election results failed to reflect the will of the voters, far-left NBC News reported.

The 45th President issued a statement via email from his “Save America” PAC Thursday, slamming the report, State Senator Ed McBrook and State Senator Mike Shirkey– the Republican leader. Trump included their office phone numbers at the end of the statement, pressing supporters to “call those two senators now and get them to do the right thing, or vote them the hell out of office!”

“As is often the case, the truth is not as attractive or as immediately desirable as the lies and the lies contain elements of truth,” state Sen. Ed McBroom, the Republican chairman of the committee that investigated the election, said in a statement that accompanied the report. “We must all remember: ‘extraordinary claims require extraordinary proof’ and ‘claiming to find something extraordinary requires first eliminating the ordinary.'”

The report, which was supported by every Republican on the committee, said: “This Committee found no evidence of widespread or systematic fraud in Michigan’s prosecution of the 2020 election.”

McBroom said he feels confident the state’s results were accurate following his review, though he has continued to offer support for Republican-led voting law changes. McBroom said many of the claims of malfeasance were the result of “a misunderstanding or an outright deception.”

“Also, sources must lose credibility when it is shown they promote falsehoods, even more when they never take accountability for those falsehoods,” he said. “At this point, I feel confident to assert the results of the Michigan election are accurately represented by the certified and audited results.” Continued Below

The report also mentioned Antrim County, a small county in the northern part of the state where votes where flipped from Trump to Biden from alleged “human error” by election officials. The error was quickly corrected, and the certified results showed a substantial Trump victory there.

“The Committee recommends the attorney general consider investigating those who have been utilizing misleading and false information about Antrim County to raise money or publicity for their own ends,” the report said, adding, “The many hours of testimony before the Committee showed these claims are unjustified and unfair to the people of Antrim County and the state of Michigan.”

In December, however, a judge in Michigan on Monday permitted parties in a court case to release the results of a forensic imaging examination of Dominion Voting Systems machines, with redactions of code. A 23-page report was published soon after by Allied Security Operations Group. It included expert analysis from Russell Ramsland. Ramsland’s team concluded that Dominion’s system “intentionally generates an enormously high number of ballot errors to create systemic fraud and influence election results.” The report found an error rate of 68.05 percent, as previously reported by The Freedom Times.

Michigan State Senators Mike Shirkey and Ed McBroom are doing everything possible to stop Voter Audits in order to hide the truth about November 3rd. The Senate “investigation” of the election is a cover up, and a method of getting out of a Forensic Audit for the examination of the Presidential contest.

Corrupt (?) politicians falsely claim there was no Voter Fraud in Michigan (has anyone looked at what is considered the most corrupt election city in the U.S., DETROIT?), however, they admit to “problems with the numbers” that rigged 7,048 votes to illegally give a very conservative county to Joe Biden, which raised big signals, only to then find that it was actually President Trump that won the county by 3,788 votes, not Biden.

The report mentions that Detroit engaged in “illegal actions” by blocking our poll workers, and concludes mailing of unsolicited ballot applications “demonstrates a clear vulnerability for fraud”, and then goes on to say that no one should question this election?

Instead of doing a Forensic Audit, they want to investigate the Patriots who have fought for the truth and who are exposing a very possibly Rigged Election. The truth will come out and RINO’s will pay at the polls, especially with primary voters and expected challenges. Our Country was based on Free and Fair Elections, and that’s what we must have! 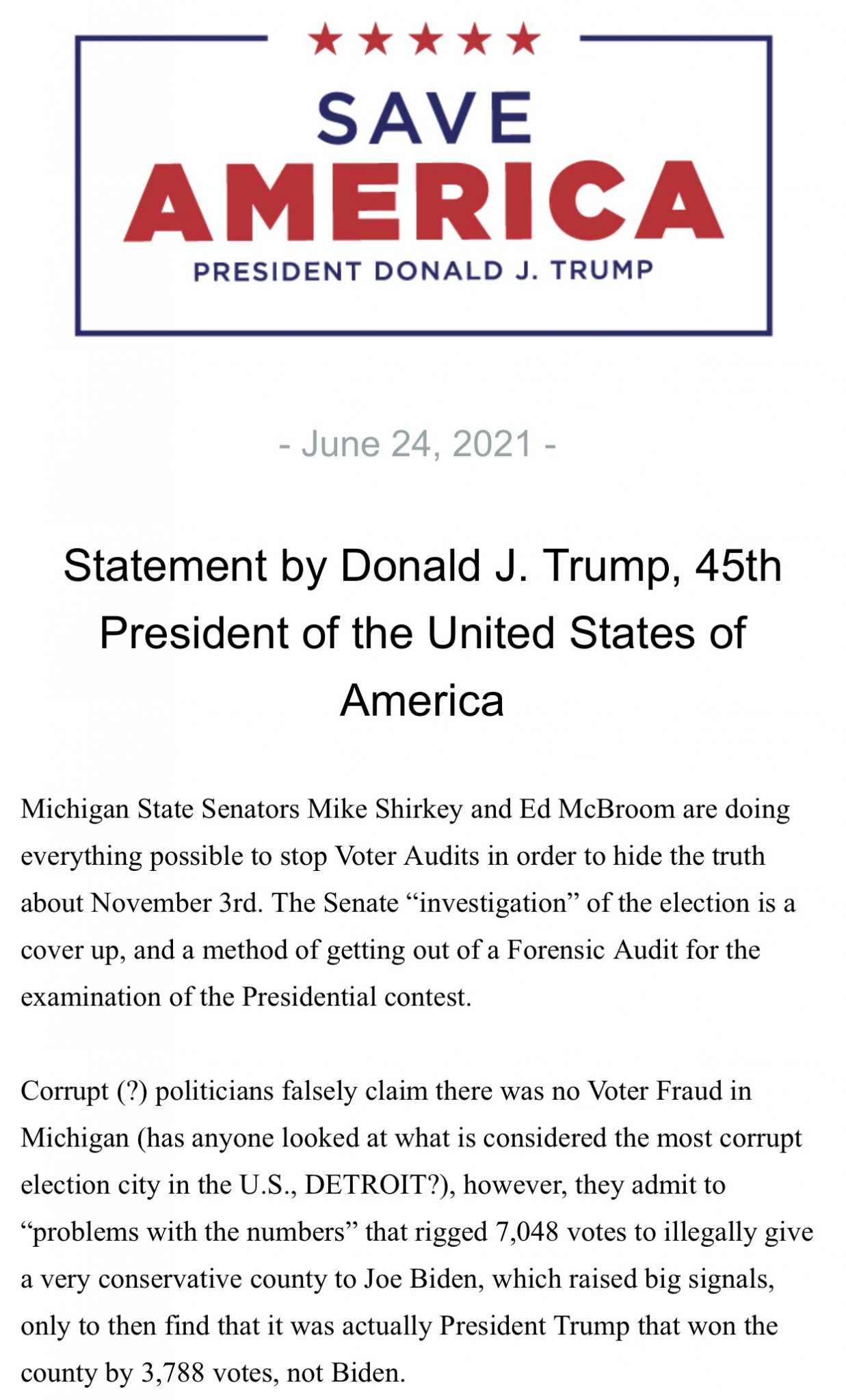 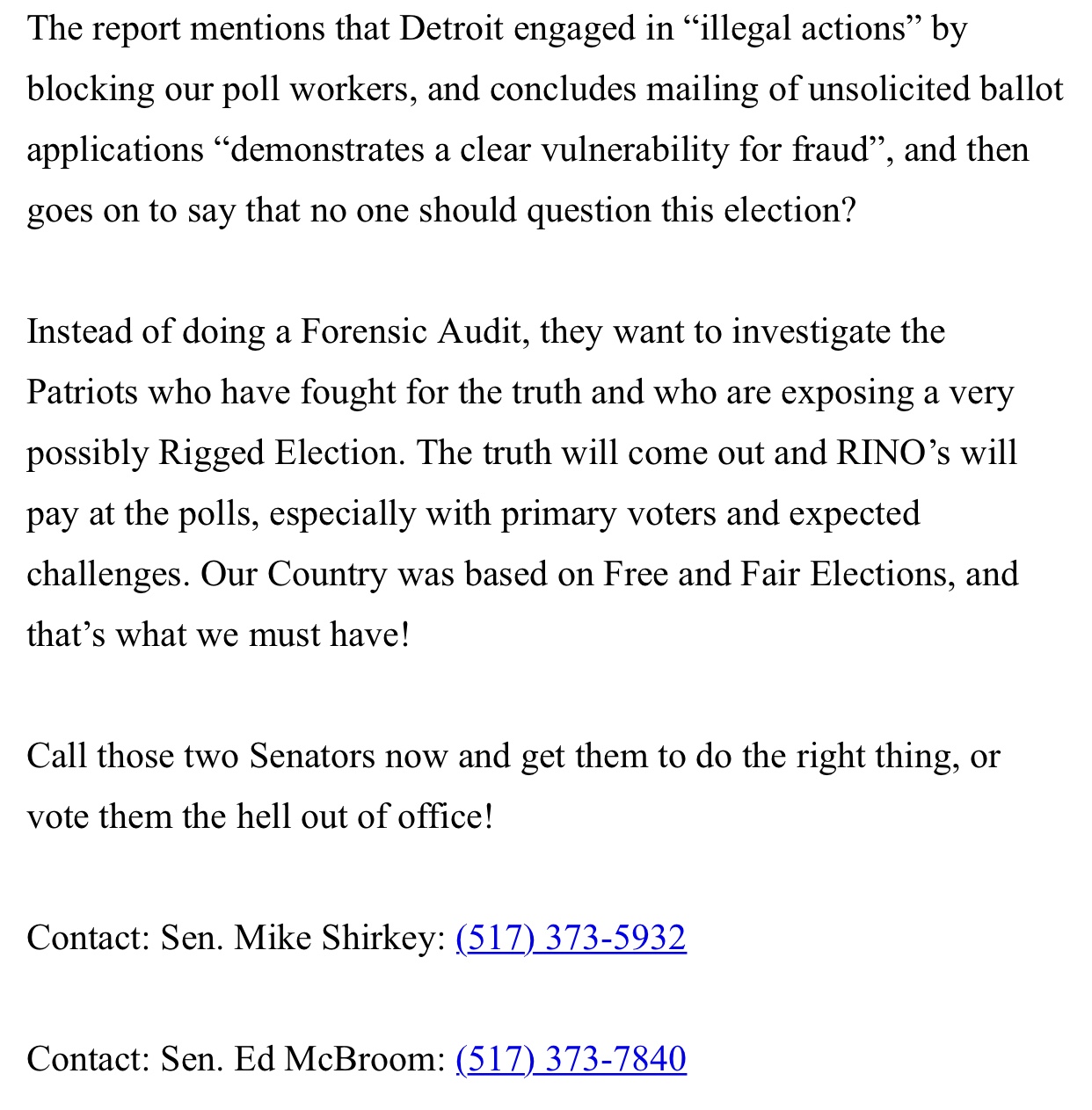 (Related: MI Sec. Of State Urges County Clerks Not To Give Access To Voting Equipment & Records If Audit Is Ordered)

Sen. Tim Scott On Impeachment: Trump ‘Is Simply Not Guilty’ He Said, ‘Go Peacefully To Protest’