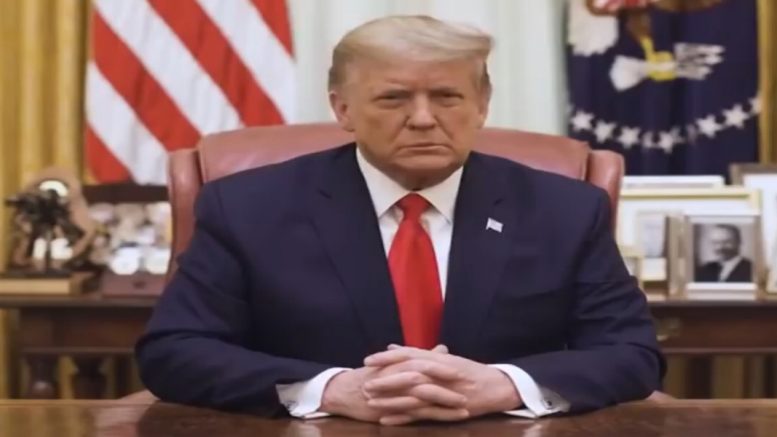 Monday, during an interview on Real America’s Voice, the “Water Cooler” show, the 45th President told host David Brody that he has not admitted defeat, nor has he conceded to the results of 2020 November general election.

His remarks come after Newsweek published an article, appearing to take former President Donald Trump comments out of context. “We were supposed to win easily, 64 million votes,” Trump said in an interview with Fox News’ Sean Hannity. “We got 75 million votes, and we didn’t win, but let’s see what happens on that.”

“Do you admit defeat?” David Brody asked the 45th Commander in Chief. “I just want to understand that.”

“No. I never admitted defeat. We have a lot of things happening right now. I think that was an election– I don’t think, all you have to do is read the newspapers and see what’s coming out now,” Trump said.

“No, I never– the word is concede. I have not conceded,” President Trump confirmed.

Trump has not said whether he plans to run for president in 2024. Video Below

President Donald Trump says he has “not conceded”:

BREAKING: President Donald Trump tells @dbrodyreports: “I never admitted defeat…I have not conceded." Watch the rest of the interview on #TheWaterCooler today on #RealAmVoice @Justthenews pic.twitter.com/gknI9FDQH4

Asked during the Monday interview whether he would try to become speaker of the House in 2022, President Trump replied, “Well, I’ve heard the talk, and it’s getting more and more, but it’s not something that I would have considered, but it is — certainly, there is a lot of talk about it. I have a good relationship with [Rep.] Kevin [McCarthy], and hopefully, we will do everything traditionally.”

President Trump’s full interview begins at the 4:25 mark into the video:

(Related: Sidney Powell: Trump Should Be ‘Reinstated’ & ‘New Inauguration Date’ Should Be Set If Results Flip To Show He Won)

AZ Sec. Of State Admits She’s Working With Other State Leaders To ‘Make Sure’ Audits Like AZ ‘Doesn’t Happen In Their States’