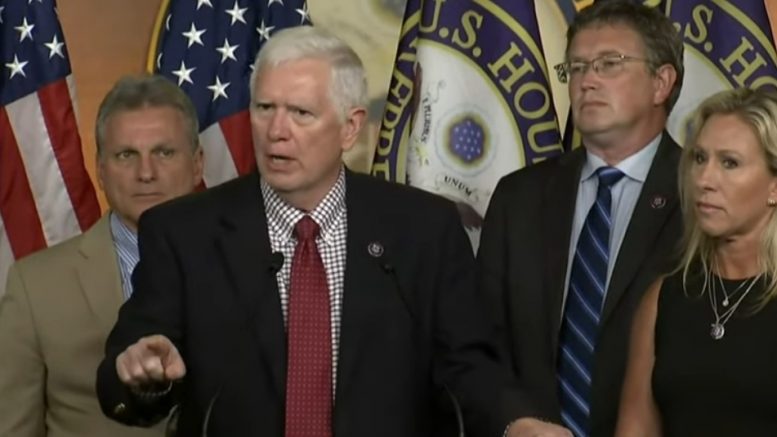 Congressman Mo Brooks made a reporter’s question backfire on Thursday after implying that Rep. Marjorie Taylor Greene was “feeding” attacks against Asian Americans.

The situation unfolded at a press conference where House Republicans introduced the Fire Fauci Act — a bill that, if passed, would remove and replace Dr. Anthony Fauci from his role as NIAID director.

During the briefing, Rep. Greene suggested that the coronavirus could be a man-made ‘bioweapon’ based on information tied to Dr. Fauci’s emails and the Wuhan lab where COVID-19 is suspected to have originated.

“You call the China virus, you suggest that it’s a bioweapon. There’s no evidence of any of that and we’re also in a state of attacks against Asian Americans. Are you just feeding that?” asked reporter Alex Nazarian from Yahoo News.

Rep. Brooks then stepped up to the podium and lambasted the reporter over his question.

“Let’s be really clear about something. I’m really disturbed that you would even ask that kind of question,” Rep. Brooks said.

“And for you to associate the Communist Chinese Party with Chinese Americans as you have done, I would submit as egregious and wrong!” Brooks declared. Video Below

WATCH: Eric Swalwell Refuses To Answer Questions About His Relationship With Alleged Spy