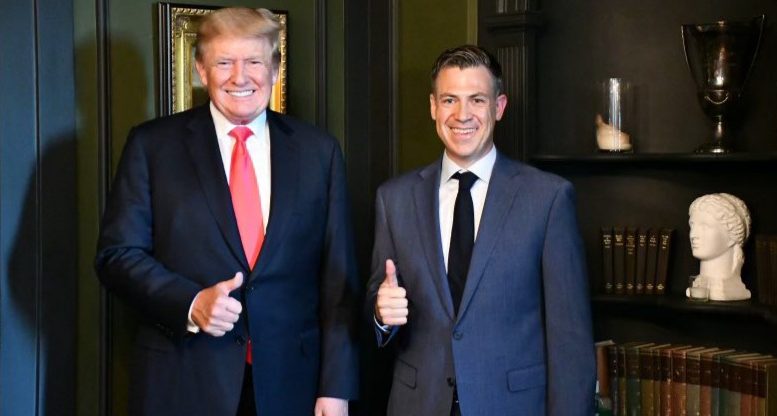 The 45th President reportedly made the remark while huddling with Rep. Banks and members of the conservative caucus’ leadership team on Thursday to lay out their policy vision, which was modeled after Trump’s agenda while he was in office, the New York Post reported.

“While the Republican party has grappled with the path it should take in the post-Trump era — with Trump critics arguing it should shift away from the former president — Banks has been among the most vocal in his calls to lean into Trumpism, arguing that incorporating parts of Trump’s populist messaging is the best path forward in retaining the GOP base he attracted during his tenure. “

Rep. Banks — who also serves in the U.S. Navy Reserve as a supply corps officer — was one of 147 Republicans who objected to certifying the 2020 election results and did so because he felt that some states’ voting rule changes violated the U.S. Constitution.

In regards to Thursday’s meeting, Banks is quoted as saying: “We spent nearly two hours with the President with President Trump who’s in great spirits. We talked for most of the time about the work that the Republican Study Committee is doing to define the agenda for the future course of the Republican Party, which is fighting for the Trump agenda. We talked about our election integrity bill, The Save Democracy Act, which he was very supportive of and we talked about what we’ve done to define immigration moving forward.”

“We believe we take back the majority by focusing on the Trump agenda, and President Trump plays a big role in that,” Banks added. “He’s obviously planning to go out and hit the road and campaign for candidates who share our vision, and we were excited to talk to him about that.”

While it still remains up in the air as to whether or not the former President will seek reelection, Banks said that Trump did not discuss 2024 ambitions during Thursday’s meeting. However, the Indiana congressman indicated members of the group are supportive of a potential bid.

We leave you with some tweets related to Trump’s meeting with Rep. Banks:

Thank you to President Trump for hosting Chairman @RepJimBanks and members of #RSC leadership tonight.

The Trump agenda is the #winning agenda and RSC will continue leading the way in Congress! 🇺🇸 pic.twitter.com/amoGC3MY1R