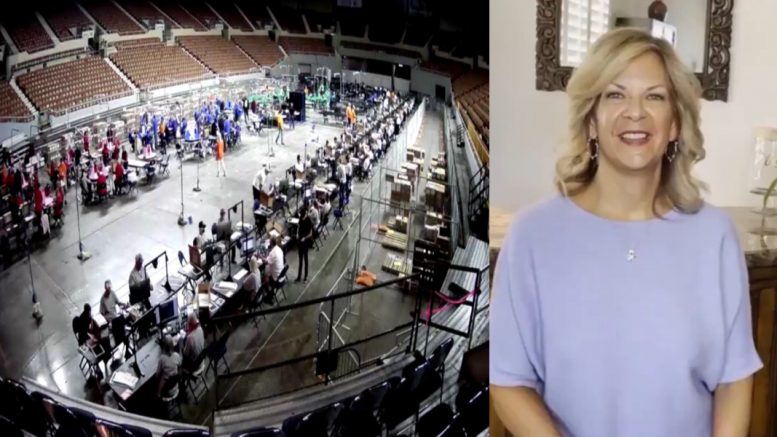 In a video posted to Twitter, Dr. Ward detailed her “first hand experience” of touring the Veterans Memorial Coliseum in Phoenix where the hand-counting of 2.1 million ballots is being conducted.

“As you’ve heard here, … individuals and elected representatives from many states are touring the audit and are looking at the possibility of taking Arizona’s lead in auditing their own election results,” Dr. Kelli Ward said.

Last week, three Pennsylvania legislators toured the coliseum in Phoenix. On Monday, officials with the Nevada Republican Party toured the recount and met with Cyber Ninjas, a Florida-based cybersecurity firm. A day later, two Republican state senators from Georgia took a similar tour alongside a state representative from Alaska. So did David Shafer, chairman of the Georgia GOP.

On Wednesday, former Georgia state Rep. Vernon Jones, who’s running to oust Georgia Republican Gov. Brian Kemp in a primary, met with Arizona legislators before taking his own tour of the coliseum. Randy Pullen, a former chair of the Arizona Republican Party who’s serving as a spokesman for the review, said lawmakers from Wisconsin and Virginia may take their own tours.

Most of the Republican visitors have expressed an interest in replicating what’s happening in Arizona in their home states. Pennsylvania state Sen. Cris Dush told reporters he “absolutely” wants an Arizona-style review conducted on his own turf, as Pennsylvania GOP leaders face growing pressure to pursue such a probe. Continued Below

“My tour, including an in depth briefing from the auditing team, as to their progress to date, and a close up tour of the facilities, was simply amazing,” Dr. Ward expressed. “I can report first hand that America’s audit is in great shape, and the process is proceeding efficiently and quickly.

“Let’s be clear: this is no ordinary ‘take a ballot and run it through the same machine again-audit’. This is a comprehensive, forensic audit that’s looking at last November’s election from every conceivable prospective– a full hands on evaluation and hand count and additional evaluation using the latest technology available,” she explained.

“In fact, it was great to see the impressive organization of the audit. When I there, less than 3 pallets of November’s ballots remain to be hand-counted. The next phase will be to convert many of the hand counting stations to digital imaging stations. That conversion process actually has already begun,” Dr. Ward revealed. Continued Below

The Arizona GOP chairwoman said that the ballot counting will be completed soon, saying, “Maybe even by June 14, the president’s birthday. (Trump). “Although, there are many duplicated ballots that have yet to be evaluated,” she noted.

She also said that the “high tech imaging process is really impressive”, adding that it is “going to take some additional to do it, and to do it right”.

“The imaging looks at the paper being used for the ballots and identifying it. They also look at the actual alignment of the printing of the ballots, from the front to the back, to see if there are any discrepancies or errors. And they even go so far as to evaluate the little oval that’s filled in by voters to see how it was done,” Dr. Ward disclosed. Video Below

“Every time a box of ballots is moved, it’s recorded on the chain of custody documents, and there’s armed security overseeing everything there all the time. America’s audit is in great hands. In fact, the audit is everything the Democrats say it is not. It’s professional … secure … efficient … state of the art, and it is completely non-partisan. More importantly, it is 100% transparent,” she added.

The livestream of the audit in Maricopa County can be viewed HERE.

Get a behind the scenes update of America's Audit with AZGOP Chairwoman @kelliwardaz as she reports on her tour of the audit facilities: The counting continues and imaging evaluations begin. #AmericasAudit WE WILL #FinishTheAudit pic.twitter.com/S2vx3VWdXJ