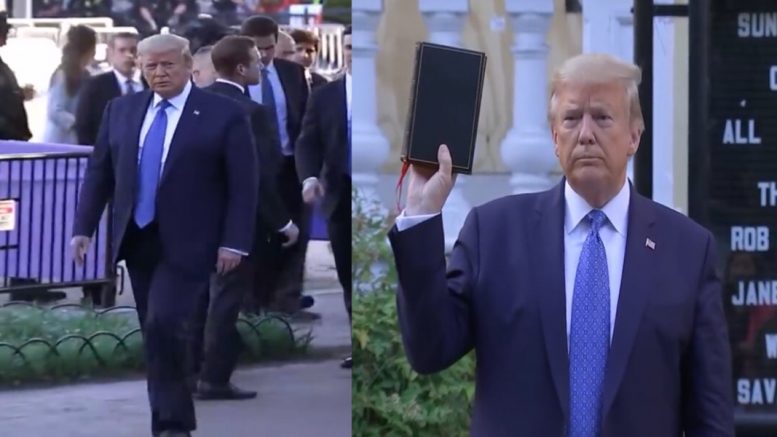 The 45th Commander in Chief issued a statement via email from his “Save America” PAC following a Wednesday report released from the Department of the Interior Inspector General, Mark Greenblatt, regarding federal police officers who cleared protesters from the city’s Lafayette Park in June 2020.

An investigation by the Interior Department’s inspector general has found that the federal police officers cleared protesters from the park so that a contractor could install fencing — not to let President Donald Trump hold a photo opportunity at a nearby church.

That finding, published Wednesday, is likely to surprise many critics of Trump, who have long asserted that the president or his attorney general ordered the operation to pave the way for an act of political theater, NBC News reported.

Inspector General Mark Greenblatt found that the Park Police had the authority to clear the park, and decided to do so — in consultation with then Attorney General William Barr — hours before anyone knew President Trump planned to make an appearance.

“The evidence we reviewed showed that the (Park Police) cleared the park to allow a contractor to safely install anti-scale fencing in response to destruction of Federal property and injury to officers that occurred on May 30 and May 31,” Greenblatt said in a letter.

“Moreover, the evidence established that relevant (Park Police) officials had made those decisions and had begun implementing the operational plan several hours before they knew of a potential presidential visit to the park, which occurred later that day. As such, we determined that the evidence did not support a finding that the (Park Police) cleared the park on June 1, 2020, so that then President Trump could enter the park,” he said. Continued Below

Greenblatt also found that Barr’s physical presence in the park had no impact on the decision to clear the park. Widely circulated video shows Barr entering Lafayette Park after 6 p.m. with his security detail and other White House staff members, NBC News noted.

The IG investigation took no position on whether the Park Police made a good decision by deciding to clear the park — only that the decision was lawful and consistent with policy.

The report states that protests on May 30 and 31 “were mostly peaceful during the day,” but that “acts of violence increased in the late afternoon and evenings,” and that “officers reported that some protesters threw projectiles, such as bricks, rocks, caustic liquids, frozen water bottles, glass bottles, lit flares, rental scooters, and fireworks, at law enforcement officials.” Continued Below

In a Wednesday statement, former President Donald Trump responded, expressing his gratitude to the inspector general for “Completely and Totally exonerating” him.

Thank you to the Department of the Interior Inspector General for Completely and Totally exonerating me in the clearing of Lafayette Park!

As we have said all along, and it was backed up in today’s highly detailed and professionally written report, our fine Park Police made the decision to clear the park to allow a contractor to safely install antiscale fencing to protect from Antifa rioters, radical BLM protestors, and other violent demonstrators who are causing chaos and death to our cities.

In this instance, they tried burning down the church the day before the clearing. Fortunately, we were there to stop the fire from spreading beyond the basement—and it was our great honor and privilege to do so. Again, thank you to the Inspector General! Continued Below

According to the IG report, a total of 49 Park Police officers were injured during the protests from May 29 to May 31, including one who underwent surgery.

Historic statues in Lafayette Park, were vandalized with graffiti, and on May 31, the park’s comfort station was set on fire, the report says. A fire was also set in the basement at St. John’s Church on May 31, and nearby stores and businesses were looted, the report adds. 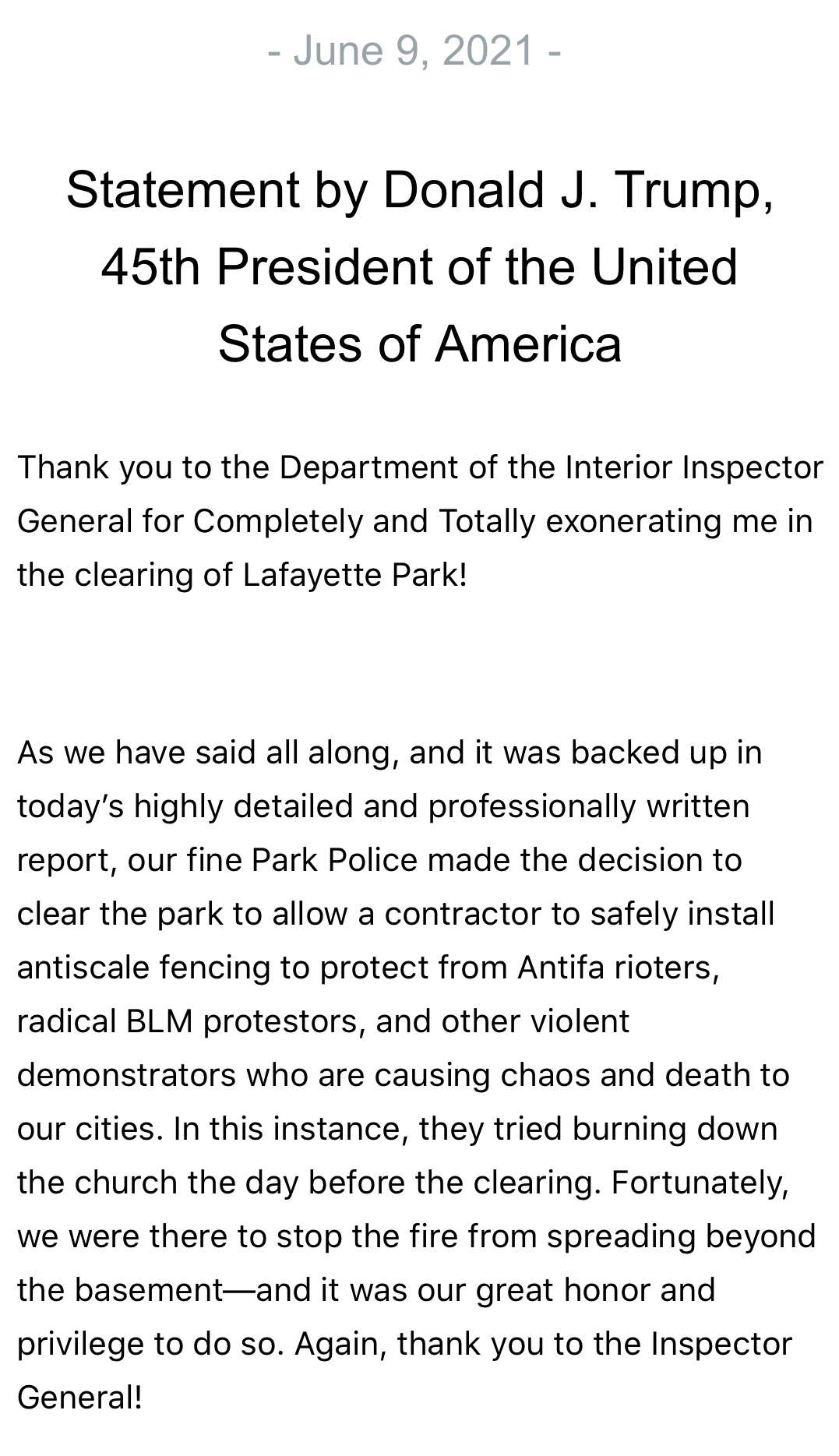 For our children, for the very soul of our country, we must defeat him. But I mean it when I say this: we can only do it together. https://t.co/G1yE67q9Nz