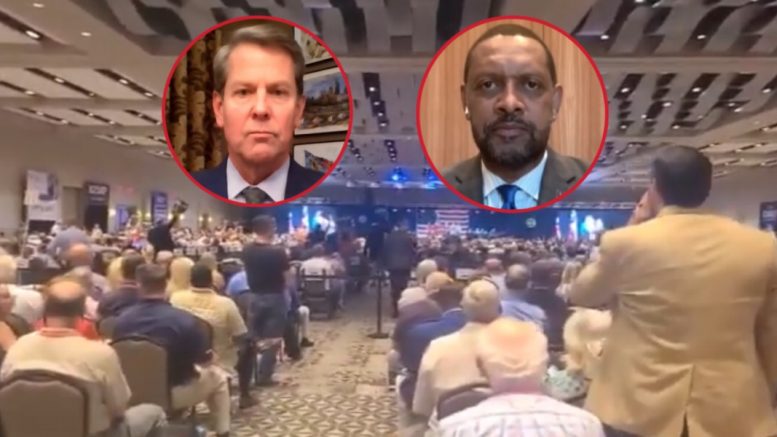 Video surfaced on Twitter Saturday which showed Georgia Governor Brian Kemp (R) being overwhelming met with extended boos from some in attendance at the Georgia GOP Convention.

Statehouse reporter from The Atlanta Journal-Constitution, Maya T. Prabhu, reported that Governor Kemp was “greeted at the [Georgia] GOP convention with loud boos,” and Kemp spoke for “around 30 seconds before it was quiet enough to hear him from the press area.”

As reported by The Atlanta Journal-Constitution:

Many booing held signs supporting Vernon Jones and shouted their disappointment about the election results any time Kemp noted an accomplishment he’s achieved during his term.

An icy reception was expected, as many Republican voters are still upset that Kemp didn’t do more to overturn Georgia’s presidential election in favor of Donald Trump. Still, standing with his wife and three daughters, Kemp powered through his speech, highlighting his signing of legislation that severely limited access to abortions and overhauled the elections process and being the first state to mostly reopen during the pandemic.

Kemp’s only declared primary opponent, former state Rep. Vernon Jones, is also expected to address the crowd on Saturday. Jones served in DeKalb County and at the Statehouse as a Democrat made national news last year when he announced his support for former President Donald Trump. Jones announced he was changing parties earlier this year. Continued Below

.@BrianKempGA greeted at the Ga GOP convention with loud boos. He was speaking for about 30 seconds before it was quiet enough to hear him from the press area. But he got his first full applause when he mentioned Georgia being the first state to reopen during the pandemic. #gapol pic.twitter.com/4LcgRqkvoO

Former DeKalb County CEO and state lawmaker Vernon Jones, who has his sights on the Georgia governor’s office, reacted to Gov. Kemp receiving boos from some in attendance, writing on Twitter Saturday, “Today, Georgia Republicans made their voices resoundingly clear. Change is coming.”

Mr. Jones also wrote, “It’s time to take OUR Republican Party back” and attached a photo of himself speaking at the Georgia GOP Convention.

It’s time to take OUR Republican Party back.

Thank you to the @GaRepublicans and @StewartBragg2 for such an incredible weekend in Jekyll Island.

As reported by The Atlanta Journal-Constitution:

Jones said he was not afraid of Democrats in Congress or in Georgia, calling President Joe Biden, House Speaker Nancy Pelosi and Senate Majority Leader Chuck Schumer the cowardly lion, the tin man and the scarecrow.

“And Dorothy isn’t leading them from Kansas, they’re being led by that Wicked Witch from the South, Stacey Abrams,” he said.

Vernon Jones, running for Georgia governor and a fmr. Democratic state lawmaker, takes the stage with his usual bluster:

“I want all the RINOs and all the Democrat spies to get the hell out of here, let the door hit you on the way.” #gapol pic.twitter.com/ImWa9sdHBT