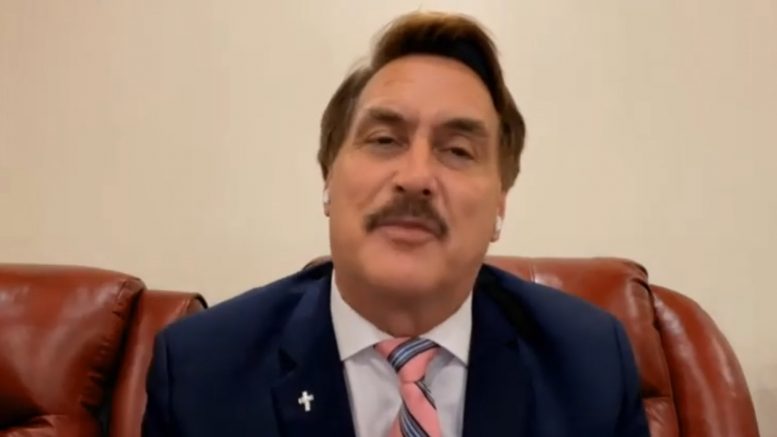 Business magnate Mike Lindell sued Dominion Voting Systems and Smartmatic for over $2 billion in a Minnesota federal court on Thursday alleging the companies “weaponized the legal process and intimidated witnesses to election fraud” in order to “cover up gross security flaws in their electronic voting systems—and information showing cyber attacks and hacking in the November 2020 election.”

CD Media reports, “The lawsuit details 19 successful cyber attacks the night of November 3rd, 2020, in which 555,864 votes were flipped in six battleground states, giving the Presidency to illegitimate Joe Biden, and plunging the United States into a destructive abyss.”

Prior to his lawsuit filing, Lindell claimed he and his team have obtained ‘cyber packets’, which are forensic packets that the he says will prove ‘each attack that happened by China’ when votes were allegedly flipped from President Trump to Joe Biden.

Here is an excerpt from Lindell’s 82-page court filing:

Dominion has weaponized the legal process and intimidated witnesses to election fraud by suing or threatening to sue over 150 private individuals or organizations, including dozens of citizen volunteer poll watchers, with baseless defamation lawsuits or “cease and desist” letters from Dominion’s lawyers at Clare Locke. Dominion further publicly boasts of doing so—merely because those citizens signed affidavits regarding fraudulent or illegal activities they personally observed during the November 2020 general election.

Conclusion: Dominion, Smartmatic, and others are desperate to cover up gross security flaws in their electronic voting systems—and information showing cyber attacks and hacking in the November 2020 election—by uniting in a common purpose to use the litigation process to attempt to suppress the revelation and public discussion of these truths.

In addition, Exhibit 12 shows a subset of 20 documented successful hacks through the election management system in the states of Michigan, Pennsylvania, Georgia, Wisconsin, and Arizona resulting in a total 555,864 votes switched from President Trump to candidate Vice President Biden in the 2020 general election. These hacks came primarily from within China and are identified by the date, location, and the network from which the hack originated and the location and network that was the target of the hack.

You can click the following two links to read Mr. Lindell’s full filing:

Lindell also claims to have a ‘royal flush’ of ‘evidence’ to take to the Supreme Court that proves massive amounts of votes were flipped by foreign hackers when results were tabulated for the 2020 election, and is in the process of hammering out that lawsuit to take to the high court.

In ending, a recent video from Lindell presenting why he is 100% certain that Supreme Court justices will rule 9-0 when his case is presented to them can be viewed at Frank Speech.