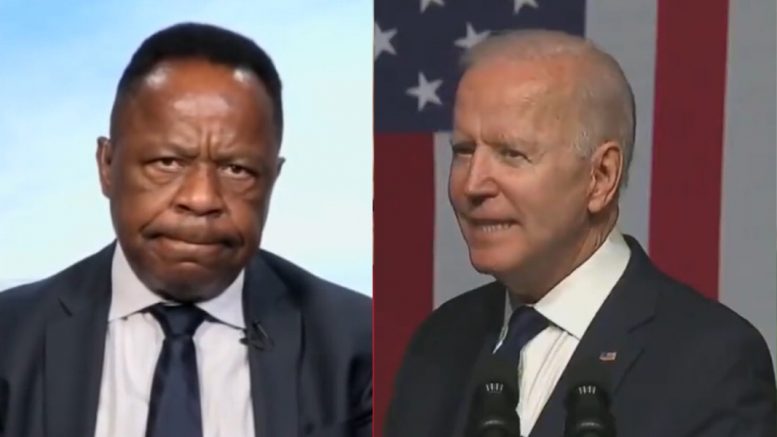 Civil Rights attorney, talk radio host, and Fox News contributor, Leo Terrell, obliterated Joe Biden on Wednesday with a five-word zinger after the 78-year-old Democrat claimed Black entrepreneurs don’t have the same problems as white entrepreneurs because the latter has “lawyers” and “accountants.”

Meanwhile, Mr. Terrell tweets a daily message for Biden and his administration:

Joe Biden has a history of making perplexing remarks. Last year, he told a radio host that anyone struggling to decide whether to support him or President Donald Trump in the general election “then you ain’t black.”

“Well I tell you what, if you have a problem figuring out whether you’re for me or Trump, then you ain’t black,” Biden told Charlamagne Tha God from “The Breakfast Club”.

During a CNN Town Hall on February 16, Biden was asked whether lessening the impact of COVID-19 on Black and Hispanic communities was a priority for the Biden administration on a local and national level.

“The other thing we found is, and I’m sorry to go on, but this is really important to me. The other portion is a lot of people don’t know how to register,” Biden said of the vaccination process. “Not everybody in the community, in the Hispanic and the African-American community, particularly in rural areas that are distant and/or inner city districts, know how to use … Know how to get online to determine how to get in line for that COVID vaccination at the Walgreens or at the particular store.”

Biden also made bizarre comments last August when he compared diversity in African American and Latino communities during an interview.

“And by the way, what you all know but most people don’t know, unlike the African American community with notable exceptions, the Latino community is an incredibly diverse community with incredibly different attitudes about different things. You go to Florida you find a very different attitude about immigration in certain places than you do when you’re in Arizona. So it’s a very different, a very diverse community,” Biden told a panel of journalists at the National Association of Black Journalists-National Association of Hispanic Journalists 2020 virtual convention.

Biden further landed in hot water last September over a viral clip of him suggesting why people were able to quarantine during the coronavirus pandemic. “They’re saying, ‘Jeez, the reason I was able to stay sequestered in my home is because some Black woman was able to stack the grocery shelf,'” Biden is heard saying in the clip.

At a campaign event in Iowa in August 2019, Biden told supporters “poor kids are just as bright and talented as white kids.” He quickly corrected himself, adding: “Wealthy kids, black kids, Asian kids.”