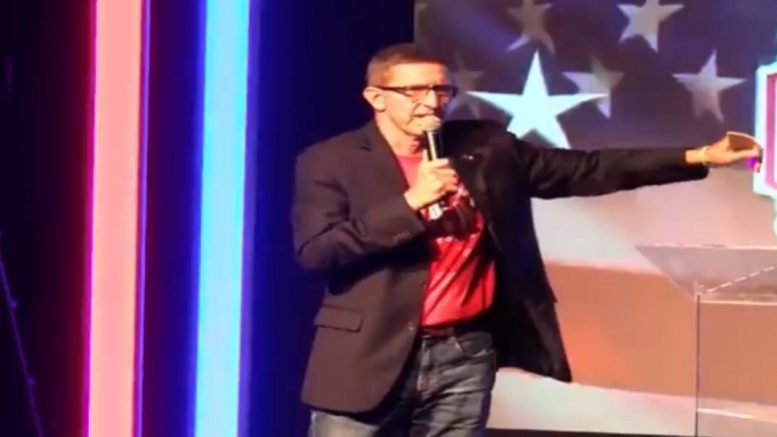 General Michael Flynn, who served as President Donald Trump’s national security advisor, denied claims Monday in a statement that he supports a Burma-style coup in the United States.

“I want to know why what happened in Myanmar can’t happen here,” an audience member asked Flynn during the “For God & Country Patriot Roundup” conference in Dallas over the weekend.

“No reason, I mean, it should happen here. No reason. That’s right,” General Flynn appeared to respond. He didn’t elaborate, and the remarks appeared to be off-the-cuff.

Here is the video of former national security advisor Michael Flynn saying that he thinks a coup like the coup in Myanmar should happen in the US. pic.twitter.com/7mGYjfXg18

In a Monday statement on Telegram, General Flynn wrote,” Let me be VERY CLEAR – There is NO reason whatsoever for any coup in America, and I do not and have not at any time called for any action of that sort.”

“Any reporting of any other belief by me is a boldface fabrication based on twisted reporting at a lively panel at a conference of Patriotic Americans who love this country, just as I do,” he said.

“I am no stranger to media manipulating my words and therefore let me repeat my response to a question asked at the conference: There is no reason it (a coup) should happen here (in America).” Continued Below

Attorney Sidney Powell came to General Flynn’s defense during the event, saying, “I think the first order to dispel a horrible incident of fake news. The fake news has grossly distorted what General Flynn said … in response to a question about Myanmar.”

“There are no circumstances under which he urged the military to take any action to unseat the president.  We all know … the military serves under the Commander-in-Chief, and General Flynn in no way encouraged any act of violence or any military insurrection. It’s very important that, that be clear.”

“There are no circumstances under which he [Gen Flynn] urged the military to take any action to unseat the President. We all know…the military serves under the Commander-in-Chief and General Flynn in no way encouraged any act of violence or any military insurrection.” pic.twitter.com/ilBG3V00I9

Meanwhile, a user on Twitter noted that leftwing news publications are “losing their minds” over their perception of General Flynn’s remarks.

The Fake News media is losing their minds over General Flynn’s commentary on Myanmar.

They even found the time to take a swipe at #SidneyPowell.

Earlier this year, Flynn’s brother and brother’s wife filed a lawsuit against CNN for $75 million relating to the network’s allegations that they are supporters of “QAnon”.

(Related: General Michael Flynn: “Everything Is a Distraction to What Happened on the 3rd of November”)