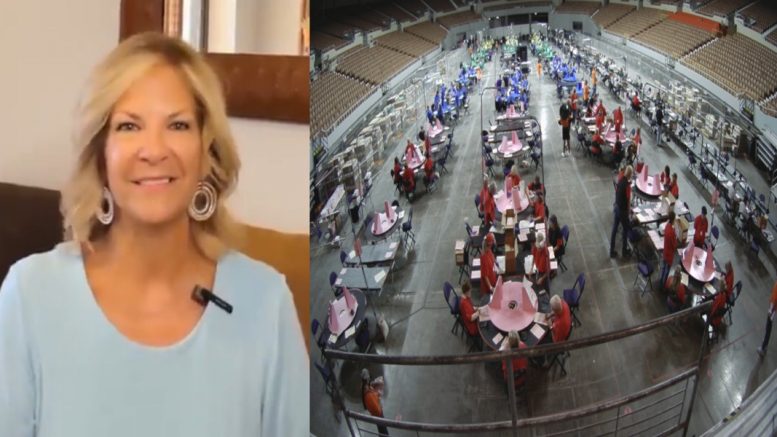 Dr. Ward reported that one million ballots have been counted thus far by the Arizona Senate’s audit and is getting closer to the halfway point. The total ballot count needed to complete the audit is 2.1 million.

“As for ‘America’s Audit,’ counting continues today and the latest total has hit one million ballots evaluated and hand-counted,” Dr. Kelli Ward announced. “That’s in large part due to more volunteer centers in place, and that gets us to nearly 50 percent of the 2.1 million 2020 ballots cast in Maricopa County.”

The audit, which is being conducted by the firm Cyber Ninjas, is expected to finish in late June, according to the Arizona GOP chairwoman. Dr. Ward also noted that there are further efforts to expand the audit.

“We also know there has been additional discussion among the Arizona Senate and the auditors regarding the possibility of hiring a California-based election transparency group called Citizens Oversight to run an entirely electronic recount of digital images of ballots to count all votes cast for every single race on the county’s ballot. These totals could be used in every race to compare totals with official totals for Maricopa County and from the audit itself,” she explained.

The decision ultimately would be decided by Arizona State Senate President Karen Fann and her team “if they deem it necessary”, Dr. Ward said. Continued Below

She also warned that “attacks on the audit have never waned”, adding, “We can only expect them to continue and ramp up considerably as we get closer to the end of ballot counting.”

Dr. Ward said that the Maricopa County forensic audit is being “undermined by through the distorted lens of the Democrats and their partners on the far left, and in the mainstream media”, clarifying, “They call it the bogus audit, the Republican audit, the fake audit, the fraudit, the right-wing inquisition.”

“And now, they are preparing for the worst of all scenarios for them as if they know something we don’t. Don’t be fooled by their propaganda and lies. America’s audit is in good shape and proceeding responsibly, professionally, efficiently, effectively, and on time,” Dr. Ward added. Video Below

We honor and give our thanks and prayers today to those who died in uniform serving our nation and their families who sacrificed so much for our freedom. America's Audit in good hands. AZGOP Chairwoman @kelliwardaz reports 1 million ballots counted #AZAUDIT #AMERICASAUDIT pic.twitter.com/D634eNyAWV

The audit can be viewed live HERE.

(Related: Dr. Kelli Ward: The Name of the ‘Deleted Database’ That Was Fully Recovered Is ‘Results, Tally, and Reporting’)