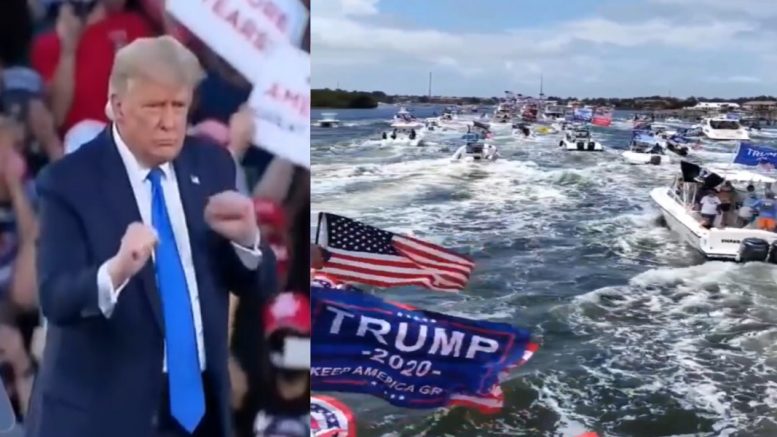 Thousands of boats could be seen in social media videos on Monday, participating in a parade in Jupiter, Florida, which took place on Memorial Day– with supporters of former President Donald Trump. The boats were bedecked with flags, bearing slogans which read: “Trump Is My President,” “Trump Won,” “This Area Is a Liberal-Free Zone” and, “Trump 2024.”

Boaters participating in the “Memorial Day Patriots Boat Parade” gathered at the Jupiter Inlet Lighthouse and drove south through the Intracoastal Waterway, according to event organizers.

Pro-Trump boat parades were a regular sight during the 2020 presidential campaign and show no sign of decreasing in size or intensity of support with the 45th president potentially running to regain the White House in 2024, New York post reported.

Former President Donald Trump himself paid tribute to his supporters in an email statement from his “Save America” PAC Monday afternoon, expressing, “I love you all!”

“Wow! I hear they have thousands and thousands of boats parading in Jupiter, despite the fact that they tried to cancel us,” he said.

“Everyone is having an incredible time. On this day, we especially appreciate everyone who served and fought for our great Country. I love you all!” Trump declared. Video Below

God Bless all of our Fallen and their families! Live from Florida Patriots Boat Parade! @RealAmVoice https://t.co/vWE9zNIFzQ pic.twitter.com/RufsGqSeM2