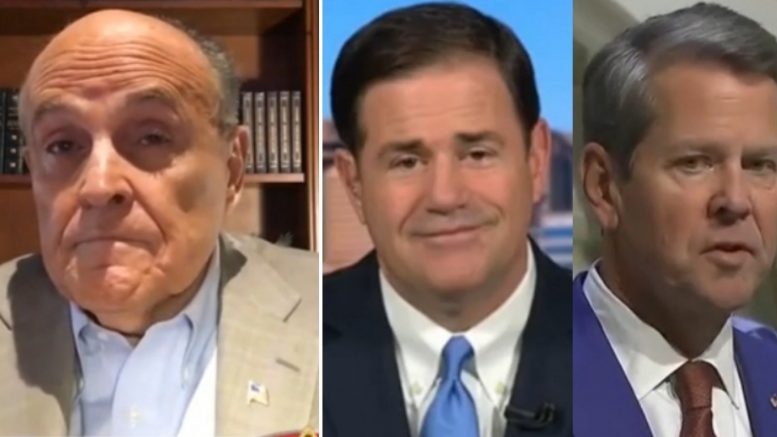 Rudy Giuliani slammed GOP swing-state governors Doug Ducey of Arizona and Brian Kemp of Georgia over their failure to thoroughly examine ‘evidence of systemic fraud’ in regards to the 2020 election.

Appearing on America’s Voice News with Steve Bannon, Giuliani alleged Ducey and Kemp intentionally blocked efforts to uncover the ‘truth’. And he detailed how they did it based on interactions he had with both governors and actions they took in the days following the November 3rd contest.

At one point, the former New York mayor called Gov. Ducey an ‘enemy’ and suggested Gov. Kemp ‘might have been worse’.

“If the evidence is true, then there’s a big margin there that could give Trump the state,” Giuliani said in regards to Arizona. “What is really true is there’s evidence of systemic fraud, and whether it affects the election or not it has to be examined so that it doesn’t happen again.”

“Any governor who covers that up, Republican or Democrat, is not a good governor,” he continued. “He’s not in your interest. He’s working for somebody else somewhere. I don’t know what’s wrong with Ducey, but he was an enemy… he wasn’t just neutral. And the same thing is true with Kemp. Don’t let him off the hook. He might have been worse.”

Giuliani’s remarks came in wake of MyPillow CEO Mike Lindell being barred from attending a spring event for the Republican Governors Conference, where he planned to confront both leaders over election integrity. Video Below

Sidney Powell Vows to ‘Keep Digging’: ‘We’re Hitting the Nail on the Head’ – ‘The American People Are Entitled to the Truth’