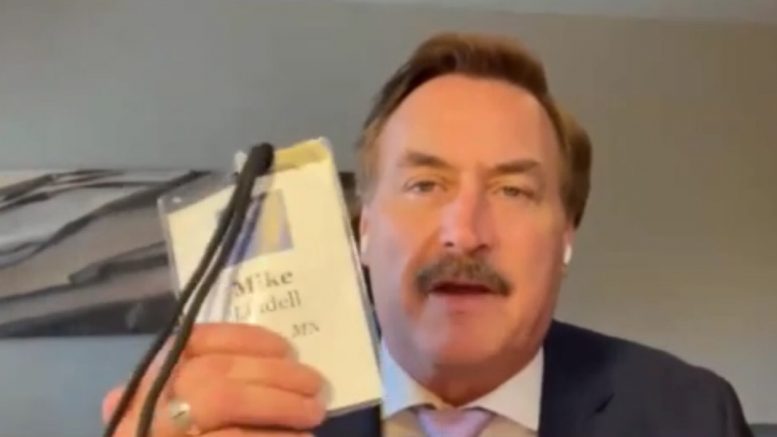 The Republican Governors Association on Tuesday threw out Mike Lindell, the CEO of MyPillow and a top Trump ally, after he showed up to its spring conference in Tennessee, he told POLITICO.

Lindell said he had flown to Nashville on Monday to attend the three-day meeting starting on Tuesday, but that only a few minutes after he collected his credential at the JW Marriott Hotel, an event coordinator in the lobby told him he was not allowed at any of the official RGA events, POLITICO reported.

Earlier on Tuesday, Mr. Lindell appeared on Steve Bannon’s “War Room Pandemic” and said he would confront Georgia Governor Brian Kemp (R) and Arizona Governor Doug Ducey (R) the RGA’s chair, over the 2020 election and allegations of fraud in their states.

“Georgia has more Dominion machines than anyone in the country. … [Brian Kemp] is hiding something. There’s no logical sense to it. I hope I get a one-on-one tonight with him and Doug [Duecy] and be able to say, ‘Why? Why would you do this to America? Why would you do this to the United States? What’s behind that? … Gimme some logic. Why have you not got behind your states’ … and get these machines uncovered, and get that ground game going, and get these Dominions falling?'” Lindell told Bannon on Tuesday.

On Wednesday, the CEO of MyPillow spoke to Bannon again, weighing in on Daniel Lippman’s report in POLTICO, saying, “I kind of called out Daniel for leaving a few facts out.”

“I was invited there specifically for the dinner … with the governors, at the governor’s mansion in Tennessee. I came downstairs at 5:30 yesterday and to get my credentials. They brought me up to this table– the coordinator said, ‘Mike, here’s your VIP pass to the governors’ roundtable and the dinner.’ He brought me back downstairs and said, ‘Here’s the governors. We’re all gonna leave together on the shuttle,'” Lindell explained. Continued Below

“I’m on the phone. About two minutes later, he came up to me and goes, ‘I got some bad news’. I go ‘What do you mean?’ He goes, ‘Well, you’re uninvited.’ And I go, ‘What? .. Why?’ You could see he kind of felt kind of shocked himself. And he said, ‘It has something to do with Brian Kemp and Doug Ducey.’ And I said, ‘What?… So am I kicked out of the other events too?’ And he said, ‘Yes. You just as well leave,'” Lindell said.

“And I said, ‘You tell Doug Ducey and Brian Kemp I’m gonna have them all over the news, not just for the horrific stuff they’ve done to our country, but now they’re even trying to suppress our voices even more,” he continued.

“They were afraid, Steve. They were afraid I was gonna call them out on the stuff that they’ve done to stop the election process, to hid it,” Lindell asserted. Video Below

He also alleged that Brian Kemp spent over “100 million dollars of taxpayers money in 2019 on Dominion machines,” adding, “And by the way, Doug Ducey … is the chairman of the RGA. And guess who is the head of the committee for election integrity? Brian Kemp. I mean, why don’t we just have Iran in charge of the world?” Lindell sarcastically wondered.