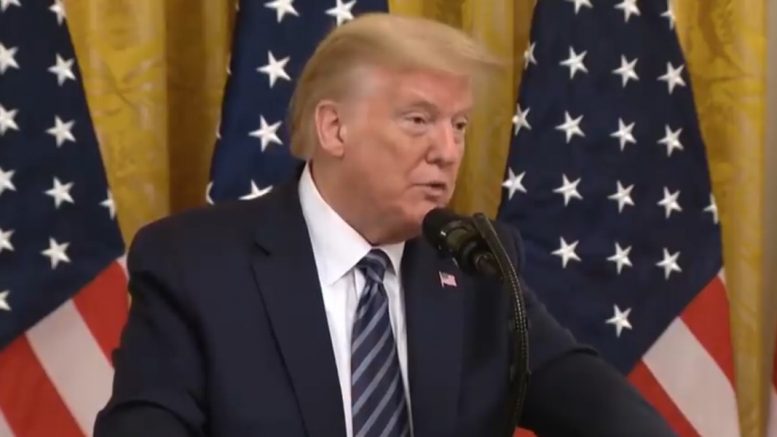 The 45th President issued two statements Tuesday via “From the Desk of Donald J. Trump”, reacting to reports as the Wuhan lab-leak theory has gained credibility.

Additionally, the former president touted the coronavirus vaccine development, which was established under the Trump administration with Operation Warp Speed.

“New United States COVID cases, because of the record-breaking development of the vaccine and its early purchase and distribution by the Trump Administration, has hit its lowest level in more than one year, and falling fast,” former President Donald Trump said Tuesday.

“I want to thank all within the Trump Administration who pushed so hard for a vaccine and got it done in less than nine months when everybody was saying it would take at least 3-5 years, and probably not happen. Without the vaccine the world would be a much different place right now,” he continued.

“Thank you also to the U.S. Military for its incredible distribution and logistical planning. Operation Warp Speed and our decision to purchase billions of dollars of vaccine before it was even approved, has been ‘One of the greatest miracles of the ages,’ according to many. Thank you!” Trump expressed.

In another statement Tuesday, President Trump said that he “was right” all along to have pinned the coronavirus pandemic on China, who concealed early data on the outbreak. Continued Below

“Now everybody is agreeing that I was right when I very early on called Wuhan as the source of COVID-19, sometimes referred to as the China Virus. To me it was obvious from the beginning but I was badly criticized, as usual. Now they are all saying ‘He was right.’ Thank you!” the 45th President expressed.

Trump did not specifically endorse the lab leak theory while he was in office, but said it was a possibility, New York Post reported. However, last May, Trump told reporters, “Yes, I have” seen evidence the virus came from the Wuhan lab, but said he was not allowed to reveal what he knew– at the time.

Trump’s statement came on the heels of Health and Human Services Secretary Xavier Becerra on Tuesday calling on the World Health Organization to launch a second investigation into the origins of the COVID-19 pandemic as the “lab leak” theory gains traction. Continued Below

The Wall Street Journal reported this week that three employees at the Wuhan Institute of Virology fell so ill that they were hospitalized in November 2019 — just before the first reported COVID-19 cases. The article cited “a previously undisclosed U.S. intelligence report.”

The Biden administration has been on the defensive about whether it’s doing enough to pressure China’s authoritarian government to be transparent.

Trump withdrew the US from the WHO last year, arguing the organization credulously accepted early Chinese data on the virus and failed to alert the world before it spread. President Biden unconditionally rejoined the WHO this year.

White House press secretary Jen Psaki on Monday said the US has “no means” to confirm that the lab workers got sick in Wuhan, but that the US wants to find out more from China. Continued Below

“An international investigation led by the World Health Organization is something that we’ve actually been pressing for for several months, in coordination with a range of partners around the world. We need that data, we need that information from the Chinese government,” she said.

Former Secretary of State Mike Pompeo, in March, revealed three pillars, indicating that the CCP knows where the virus originated, saying, “They need to be held accountable”, as reported by Swamp Drain.

Fact Sheet the State Department released on on January 15, 2021.

Florida Resident Rips County Leaders At Face Mask Debate: “I Will Not Be Muzzled Like A Mad Dog”