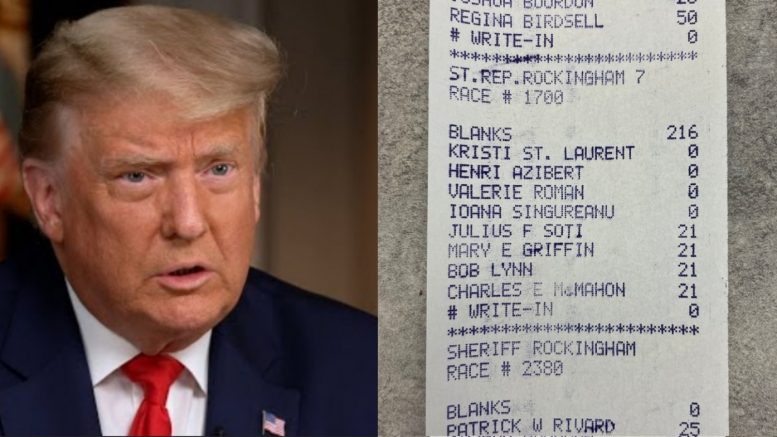 Former President Donald Trump released a statement as it was discovered that voting machines in a New Hamphshire city may have only counted 28% of votes marked for GOP candidates in a legislative contest.

The latest irregularity was uncovered as a result of a recount that was requested by Democrat candidate Kristi St. Laurent, and was granted since she lost by only 24 votes in a contest where Republicans won all four seats.

According to The Epoch Times:

“During a hand recount, it was revealed that [Kristi St. Laurent] didn’t lose by 24 votes. Instead, the effort revealed that the GOP candidates had actually received 300 additional votes, while St. Laurent lost 99 votes.

“An audit was carried out to determine why there was a discrepancy in the initial results and the recount tally. Now, the auditors involved in the process have said that they may have discovered the reason why.

“‘We now have experimental confirmation that if the contest is undervoted, a fold through a vote target can create a vote. None of the 65 ballots [were] marked for St. Laurent, but the machines interpreted 25 of the folds as votes for her,’ wrote the Twitter account, WindhamNHAuditors, which is operated by auditors Harri Hursti, Mark Lindeman, and Phillip Stark. It later clarified that it was 75 votes, not 65 votes.”

Further analysis showed an “even more dramatic problem” as the machine apparently only counted 28% of the 75 votes for each Republican candidate.

“Because if someone voted for all four Republican candidates, and the ballot happened to have its fold line going through St. Laurent’s target, then that might be interpreted by the machines as an overvote, which would then subtract votes from each of those four Republican candidates,” Philip Stark, an auditor, is quoted as saying. “Conversely, if there were not four votes already in that contest by the voter, a fold line through that target could have caused the machine to interpret it as a vote for St. Laurent.”

In response, former President Trump blasted the latest discovery in a statement released on Monday.

“Why aren’t Minority Leader Mitch McConnell and Republicans doing anything about what went on in the 2020 Election?” he questioned. “How can the Democrats be allowed to get away with this? It will go down as the Crime of the Century!”

“Other States like Arizona, Georgia (where a Judge just granted a motion to unseal and inspect ballots from the 2020 Election), Michigan, Pennsylvania, and more to follow,” Trump concluded.