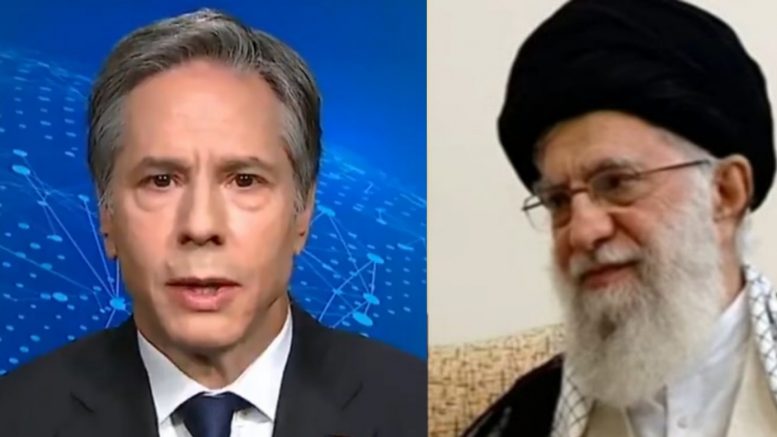 Appearing on Sunday’s airing of ABC’s This Week, Secretary of State Antony Blinken acknowledged that the Biden Administration is moving forward to lift sanctions on Iran even though Iran is funding and supporting ‘extremism’ and ‘terrorism.

“Do you believe that Iran is funding Hamas? And if they are, should the sanctions stay in place?” George Stephanopoulos asked?

Because Iran is actively trying to build a nuclear weapon, Blinkin said he thinks it’s important to try putting ‘the nuclear problem back in the box’ that that the Obama Adminstration’s nuclear deal with Iran put it in, but stopped short of saying whether or not sanctions will be lifted.

Stephanopolous went on to ask, “The Iranians say that the decision to… lift some of the sanctions has already been made. Is that true?”

We’re about to have our fifth round of discussions in Vienna with the Iranians and what these discussions and talks indirect, as you know, clarified what each side needs to do in order to come back into compliance, so we know what sanctions need to be lifted if they’re inconsistent with the nuclear agreement.” Video Below

Secretary of State Blinken: Biden is working to lift sanctions on Iran even though Iran funds terror pic.twitter.com/TkYzQGNa5J