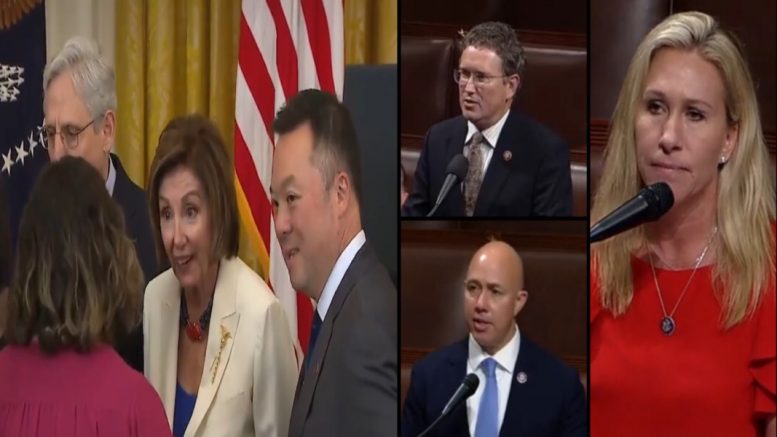 Seven Republican representatives in the House received warning letters on Wednesday for a first offense of not wearing a mask in the House chamber, following a protest against the rule on Tuesday. Lawmakers who refuse to wear masks are subject to a fine of $500 for the first offense. Subsequent offenses can result in a $2,500 fine.

Reps. Lauren Boebert of Colorado, Thomas Massie of Kentucky, Marjorie Taylor Greene of Georgia, Chip Roy of Texas, Bob Good of Virginia, Louie Gohmert of Texas and Mary Miller of Illinois defied the mask order on Tuesday. Three more had already received a warning and will be fined $500. They are Reps. Brian Mast of Florida, Mariannette Miller-Meeks of Iowa and Beth Van Duyne of Texas. They will be subject to a fine of $2,500 for additional offenses, Tampa Bay Times reported.

Complaints from some Republicans have grown louder since the Centers for Disease Control and Prevention (CDC) has recently updated its mask guidelines, saying it is now safe for fully vaccinated people to skip face coverings and social distancing in most indoor and outdoor settings.

Some of the Republicans who declined to wear a mask gathered outside the Capitol for a group picture Tuesday.

Congresswoman Marjorie Taylor Greene (R-GA) shredded a warning letter she received for not wearing a mask on the House floor in protest against the requirement.

She posted a video to her Twitter account on Wednesday showing her putting the letter through a shredder. “This is what I think of Speaker [Nancy] Pelosi’s letter,” Greene tweeted, adding the hashtag #FreeYourFace.

The Kentucky congressman did the same on Thursday:

Meanwhile, as representatives received warning letters for not wearing a mask in the House chamber this week, House Speaker Nancy Pelosi (D-CA) was seen at the White House Thursday with colleagues, maskless and not social distancing. Republican congressional lawmakers wondered where the House Speaker’s mask was, calling her a hypocrite.

Newt Gingrich Slams ‘Precious Politicians’, Demands They ‘Go Back To Work Or Resign’