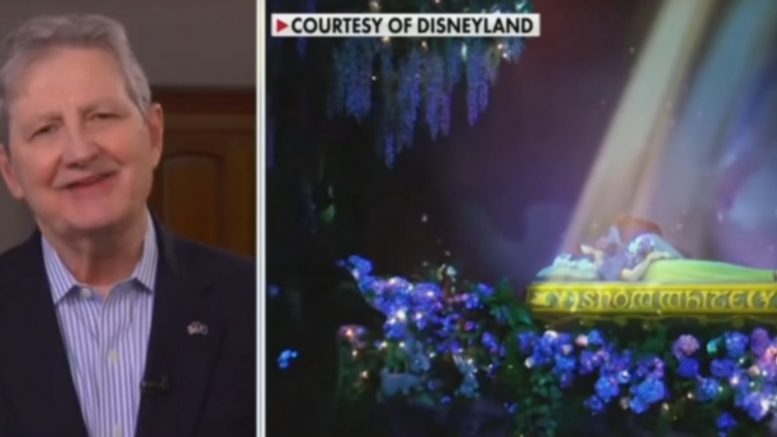 Sen. John Kennedy reacted on Monday to the left’s latest push to cancel the new grand finale of a ‘Snow White’ ride at Disneyland over a kiss the fictional princess receives that releases her from the Evil Queen’s spell.

SF Gate reporters wrote an article about the ride, where they stated, “The new grande finale of Snow White’s Enchanted Wish is the moment when the Prince finds Snow White asleep under the Evil Queen’s spell and gives her ‘true love’s kiss’ to release her from the enchantment. A kiss he gives without her consent, while she’s asleep, which can not possibly be true love if only one person knows it’s happening.”

Related Article: Sen. Kennedy On LeBron James: “He Can Go From Zero To Screw Everyone Pretty Fast”

In response, Sen. Kennedy told panelists on Fox & Friends, “Sometimes I think we are so screwed. I don’t know where these jack loons come up with this stuff.”

“I don’t mean to be be mean. I’ll try to be nicer if they’ll try to he saner,” he added. “And I shouldn’t discourage it, I guess, because so many of my Democratic friends believe in it, but it’s just utter nonsense.”

Stephanopoulos to Rep. Bush: Are you worried Defund the Police ‘Could Hurt Some of Your Colleagues Going Into the Midterm Elections?’