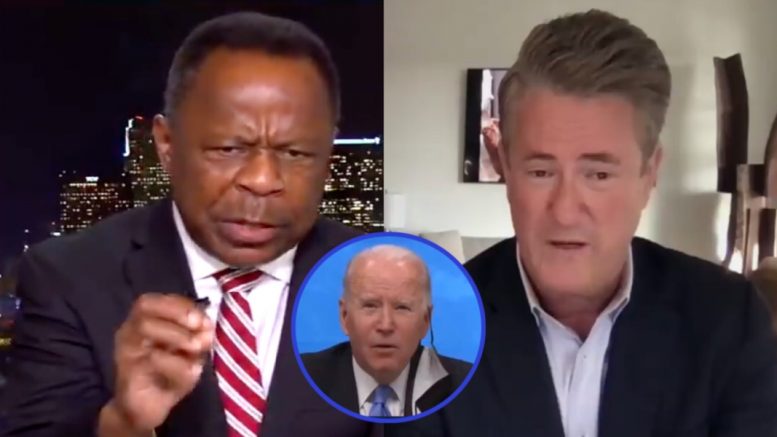 While appearing to gush over Joe Biden during MSNBC’s “Morning Joe” earlier in the month, co-host Joe Scarborough claimed that Biden was the “mirror image of Ronald Reagan.”

Scarborough alleged in part: “…We’re starting to see a really interesting dynamic take place here, I think, where Joe Biden, seems to me, to be a mirror image of Ronald Reagan”, after explaining how Reagan was “seen as temperamentally moderate, you know, everybody’s granddad” who “passed very conservative legislation”.

Joe Scarborough, while appearing on “The Late Show with Stephen Colbert” this week, claimed once more that Biden is “a lot like Reagan”, who is having “extraordinary success” as president thus far, while Mike Brzezski said Biden has done a “remarkable job”.

Civil Rights attorney Leo Terrell reacted to Scarborough’s comparison of Biden and Reagan during a Saturday interview on Fox News’ “Justice with Judge Jeanine”, saying that the Democrat in the White House “does not remind him of Ronald Reagan”.

“It is embarrassing for him to even utter the word Ronald Regan,” Terrell said of the MSNBC co-host. “Joe Scarborough, a former Republican, would never say that, but he’s on the leftwing media. So he said– sitting right there next to Mika Brzezinski and he has no other choice, because when you look at our national reputation, Joe Biden doesn’t give a strength, energy. That’s what Ronald Regan did”. Video Below

“That’s what Ronald Regan did and the world respected this country. No one respects this country, because Joe Biden is weak and everyone knows he’s taking marching orders, judge, from the left, from the extreme left, from the socialists. No one believes that whatsoever,” Terrell insisted.

.@TheLeoTerrell and @TomiLahren joined me to expose the week’s most outrageous examples of media bias, take a look! pic.twitter.com/D9VEdM7Ry4

(Related: Leo Terrell: “When You Look at the Totality of the Situation, Something Is Wrong with Joe Biden”)