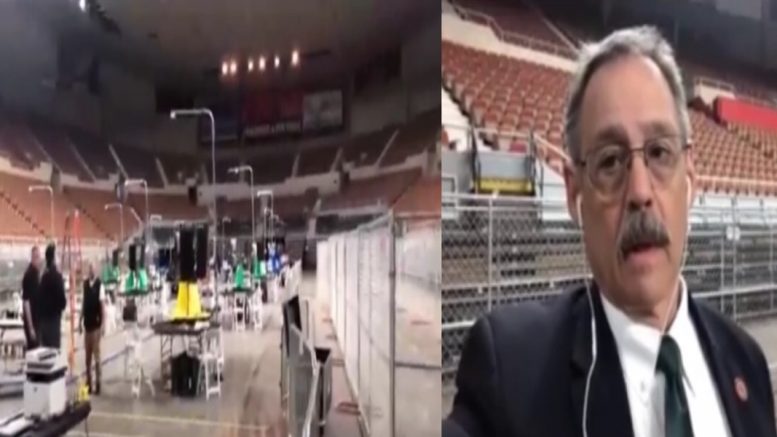 Arizona Republican State Representative Mark Finchem spoke with host Steve Bannon on “War Room Pandemic” Wednesday, giving an inside look at where the full forensic audit of the 2020 election for Maricopa County will be taking place.

Republicans in Arizona have been pushing to conduct their own audit of Maricopa County’s 2.1 million votes — including a full hand count — to rule out potential fraud. Former President Trump lost to Joe Biden by just over 10,000 votes in the Grand Canyon State, as previously reported by The Freedom Times.

In a press release issued earlier in the month, the office of Arizona Senate President Karen Fann provided the following update, in part, “Arizona Senate leadership today announced it has hired a team of independent auditors to complete a comprehensive, full forensic audit of the 2020 election in Maricopa County, including a hand recount of all ballots.”

“The audit will validate every area of the voting process to ensure the integrity of the vote. The scope of work will include, but is not limited to, scanning all the ballots, a full manual recount, auditing the registration and votes cast, the vote counts, and the electronic voting system. At the conclusion of the audit, the auditor will issue a report detailing all findings discovered during the assessment, the statement said.

The audit is being conducted at the Veterans Memorial Coliseum on the state fairgrounds, and State Representative Mark Finchem gave an exclusive inside look Wednesday where the Maricopa audit of the 2.1 million ballots will be counted.

The coliseum is booked for the audit from April 19 until May 14, but Senate Republicans estimate it will be 2-3 months before the audit is completed, Fox 10 Phoenix reported. Continued Below

“I want to make sure people understand, we have both uniformed and and plain clothes security throughout the building, around the perimeter, around the fence line. We’ve got rings of security,” Arizona State Rep. Mark Finchem told Steve Bannon.

He walked around part of the coliseum floor showing the area where the ballots will be brought in to the arena, which is protected by a fence, then proceeded to show the ballot counting stations. “We’ve got the stations that people are going to be at. As you can see, we’ve got yellow, green, blue, pink. These are all very purposely set out,” he explained.

“If anybody has a beef about the way it’s done– you want to talk about transparency, this is exactly what transparency looks like,” Finchem said.

“Each one of these stations is gonna be staffed by two people, actually three people on each side. And you’re gonna have a Democrat, a Republican, from what I understand, and you’re going to have a third person,” he continued.

“They’re going for an extremely low error rate, which it should be if you’re counting dots on pieces of paper. They’re also going to be expecting the paper for things like creases and all that,” the Arizona state rep. added. Video Below

“You would think the Democrat Party would not only be doing a happy dance, they would be saying, ‘We’re gonna get in your grill and tell you this is how we beat you’. But they’re not doing that. In fact, they’re spending a lot of resources to try and fight this,” Finchem told Bannon.

“The joy of our system is the the people have a right to scrutinize the election. You don’t see that in Communist countries. I’m pretty sure you’re not gonna see that in Chinese Communist Party land,” he expressed.

Trump Slams Barr in a Letter to NBC’s Holt: ‘Slow, Lethargic & I Realized Early on That he Never had What it Takes to Make a Great Attorney General’