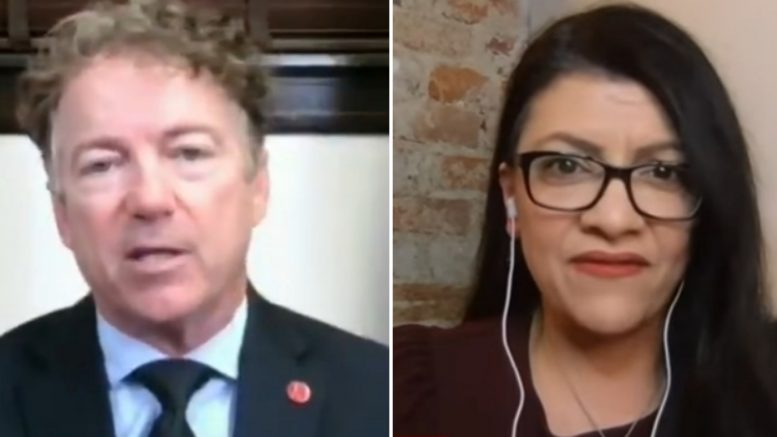 Appearing on Tuesday’s airing of Spicer & Co., Senator Rand Paul called on Rep. Rashida Tlaib to retract a statement posted on Monday, where she suggested that “policing” in America is “inherently and intentionally racist” and that “policing, incarceration, and militarization” should be done away with permenantly because “it can’t be reformed.”

Rep. Tlaib made the remarks in reaction to the the shooting death of Minnesota resident Daunte Wright, which she claimed “wasn’t an accident” despite Brooklyn Center’s police chief claiming otherwise at a press conference, where body cam footage indicated the officer involved mistook her gun for a Taser.

In response to Tlaib’s remarks, Sen. Paul stated as follows:

“We just need to get beyond thinking that everything is about race. Now is there police misconduct on occasion? Yes, and it should be punished and we should take care of it. But we shouldn’t think that every policeman out there is basing their decisions on race. I think that is simplifying this in an incorrect fashion.

“We have to also understand it’s a difficult, life-threatening job where police have to make decisions sometimes. And these people who are saying we should defund the police or get rid of the police, I think, that’s wrong-headed and you’re seeing some cities that have been on fire for months and months — that’s what happens when you don’t have police.

“And so, I think people need to be very, very careful about this, but at the same time I don’t want to be insensitive to any of these individual cases. I also don’t know the details enough to be like a juror on a trial for any of the things that have been happening. There are so many things going on.

“And we do need to look at trying to make policing better in our country, but we also have to be aware that we’re losing police by the hundreds and hundreds in all of our different cities. We’re making it such, and are we going to have policemen left when we are done with this… if we categorically say they’re all racists?

“I think that’s a very inappropriate thing for [Rep. Tlaib] to have said and she ought to retract it.” Video Below