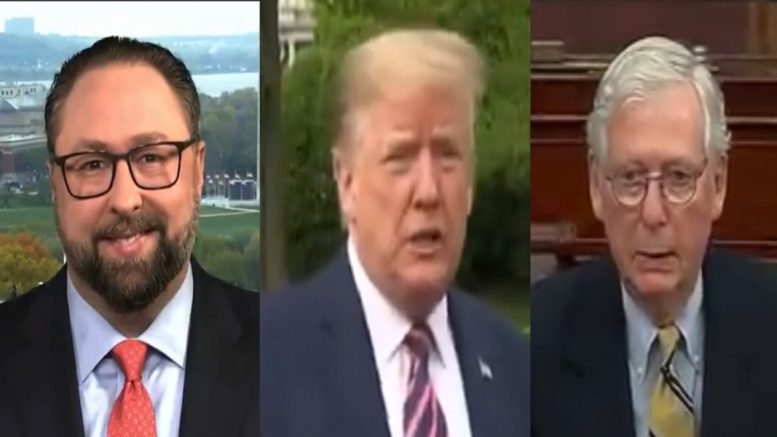 In February, the 45th President released a scorching statement, bashing McConnell for being “a dour, sullen, and unsmiling political hack.” The statement came just days after McConnell took to the Senate floor, berating the former president for allegedly “provoking the events” on January 6th at the Capitol.

During an interview Monday on Newsmax, Senior advisor to former President Donald Trump Jason Miller responded to the alleged statements made by the 45th President toward Senator Mitch McConnell.

“This is the reason why folks love President Trump, because they know he is going to speak his mind,” Miller expressed.

“Hey, they might not always agree or they might sometimes wish the language was slightly different, but they know President Trump is going to say what he’s thinking, whether it’s in the oval office or in a ball room with big donors down at Mar-a-Lago, which now is really the center of the Republican universe in Palm Beach,” he said.

Asked how is the message received by Trump at Mar-a-Lago when the former president goes off script, Miller replied, “Folks really liked it. The fact of the matter is President Trump reoriented the Republican Party that had really been split into two parts in the last couple of decades.” Continued Below

“You had the beltway elites who were pushing things like open borders and terrible trade deals, overseas involvements, a number of different wars. And then you had the conservative grassroots around the country that very much wanted a America first, wanted more of a populist message to be driven. That’s what President Trump took in, and so there’s been this disconnect between the beltway elites and the conservatives around the country,” Mr. Miller explained.

He mentioned the January Senate race in Georgia, saying that it is “another example of the beltway elites, specifically with Senator McConnell being disconnected from folks and the message they want to hear”.

“That stupid move, there’s really no other way to say it, … but that literally lost us 2 Senate seats and we blew the Senate majority. And so President Trump again, being very direct– he’s not wrong in his comments. It was a pretty poor political strategy earlier this year,” Miller said of the Senate minority leader.

“I think we’re gonna go ahead and put out the audio from most of the speech… so folks can hear for themselves,” he added of Trump’s remarks Saturday.

Related: Jason Miller On Whether Trump Will Run In 2024: “The Fire Is There…If The Election Was Next Week, He’d Be Ready To Go”

Rep. Greg Pence On The Articles Of Impeachment Vote: “BullSh** To The Fourth Degree”