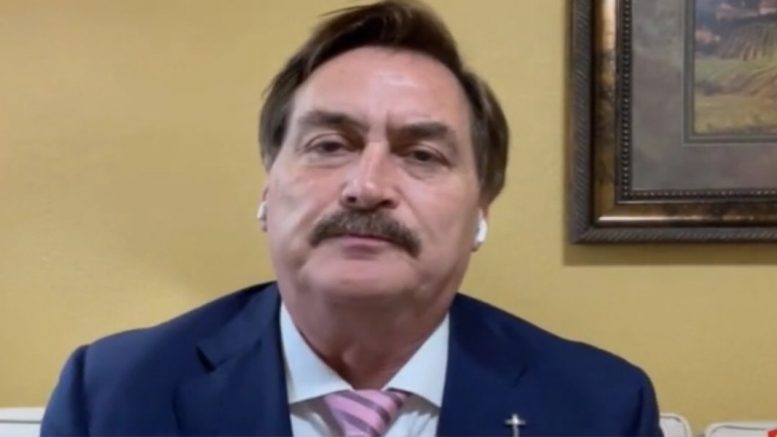 During a Friday interview on “War Room”, MyPillow CEO Mike Lindell told host Steve Bannon he is rolling out his new social media platform called “Frank” next week and going to launch “Absolute Interference”, which he said is the “next documentary” exposing alleged election fraud.

“It’s going to be the most mind-blowing evidence you’ve ever seen in history,” Lindell informed Bannon.

Mr. Lindell, during the interview, vowed to file a lawsuit against Dominion Voting Systems, saying, “The frivolous lawsuit that they put against me– My Pillow, obviously we’re gonna put in for that to be dismissed. … I want to go after them, which we are, MyPillow is going after them, because what they did– this is our First Amendment right.”

“This is the first time since 1800 that any company has done something like this. Can you imagine if we let this go?” Lindell asked. “And then, any company can come along that has money– your credit card companies– ‘Hey, if you talk about us, we’re gonna sue you. We’re gonna put all these frivolous lawsuits up just to scare people.’ So this is a lawsuit for all Americans, this is for the world actually”.

“We’re going after them in the biggest way possible, including Smartmatic, because now we’ve tied the two together. They’re the mothership. All that’s going to come out too, all that evidence. They’re all tied together in this corruption and what went on in our country, the attack on our country,” the MyPillow CEO asserted.

Bannon referenced a December 2019 letter to Dominion Voting Systems, which has been mired in controversy after an investigation found errors involving its machines in Antrim County, Michigan that resulted in a 68.05% error rate. Democratic Sens. Elizabeth Warren, Ron Wyden, and Amy Klobuchar and Congressman Mark Pocan warned about reports of machines “switching votes,” “undisclosed vulnerabilities,” and “improbable” results that “threaten the integrity of our elections.” Continued Below

“You can watch that in the movie ‘Kill Chain’. It was a documentary on HBO. In fact, we’re gonna uses pieces in ‘Absolute Interference’, because it was the Democrats a year ago that said, ‘We can’t use these machines, including Amy [Klobuchar]. … She was worried about foreign countries hacking the election. And now, it happens to be that China used the Democratic Party,” Mr. Lindell said.

He said when his new documentary comes out next week, it will “show something we just got”, adding, “We pulled 19 of the attacks. 19 on November 3rd that all came from China. We had people on the ground investigate every single piece of that. In China, we have verified the IP address, the ID’s of the computers, who did it, the building, the longitude, the latitude, coming over here, which county exactly, which computer, who did it, what was the password– you know, who they got let in by and through the machines. We have everything, the footprint.”

“We have the footprint of the timestamp that a third party has now validated, all of this. We have a timestamp in there where it shows the exact moment– let’s say 11:03 am on November 3rd. When that happened and what the flip was from Donald Trump to Biden– so we have these timestamps. You could not get that until November 20th, that information on the flip,” Lindell reported. Video Below

“What those 19 do, just those 19, flipped five states: Wisconsin, Michigan, Arizona, Pennsylvania, and Georgia. It’s over. This is 100% proof just on those– the China attack,” Mr. Lindell claimed.

Lindell said that he has hired cyber experts to investigate what allegedly took place on the November 2020 presidential election. “They validated everything,” the MyPillow CEO said of third party cyber experts involved.

“In a court of law, this wins before you walk in the door,” he predicted. “When we put it out in Absolute Interference, the whole world is gonna know. … We can prove it. We’re gonna dump it for 5 weeks to everybody in the country, the world, so by the time it gets to the Supreme Court, they’re gonna go, ‘Hey, it’s 9-0. It was an attack by China. Yes, I 100% this was an act by China. … This was an attack on our country, and we’ve got to get this taken care of. Otherwise, we lose everything.”

Mike Lindell on his lawsuit against Dominion:

Mike Lindell alleges that he has evidence of 19 cyber attacks from China on November 3rd:

Nancy Pelosi on Justice Clarence Thomas: ‘I Don’t Think he Should’ve Ever Been Appointed’