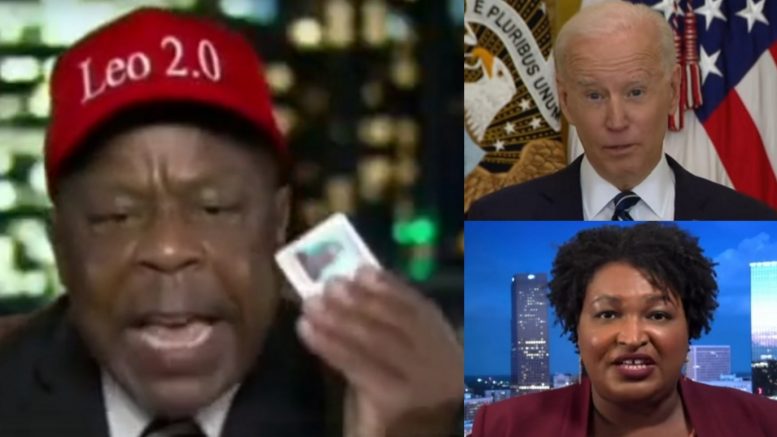 Mr. Terrell accused Joe Biden, Stacey Abrams and other forces from the left of “weaponizing” the word “Jim Crow” and lying to the American public. Because what happened during the Jim Crow era — when racial segregation was legalized — is nothing compared to what is going on in the nation today, according to Leo.

One of the key changes made to Georgia’s election law requires absentee ballots to be verified based on driver’s license numbers or other documentation instead of voter signatures — a move that leftist activists argue is “racist.” And Leo tackled this notion head on as he held up his very own driver’s license and stated as follows:

“I want Joe Biden and Stacey Abrams to know one thing. I’m a Black guy. I got a voter ID. I got a driver’s license. It’s not hard for minorities to get a voter ID because you want election integrity, Joe Biden.

“So, what they’re doing… is they’re playing the race card. And using the race card and weaponizing Jim Crow. It scares people and I’ll use a page from Donald Trump’s playbook. We need to fight back. We have call Joe Biden and Stacey Abrams for what they are — liars.

“See this ID card? It’s easy. All you do, you walk up and get one. In Georgia if you don’t have one, they’ll give you one!

“So, Joe Biden owes this nation an apology for devaluing those people who really went through hell during the civil rights movement in the 50’s and 60’s.” Video Below

In ending, here is a special message for Joe Biden that Leo posted to Twitter on Monday:

Dear Joe Biden. It’s not difficult for blacks and minorities to obtain a voter ID. I have a California License with photo ID. Stop lying to America about voter suppression.