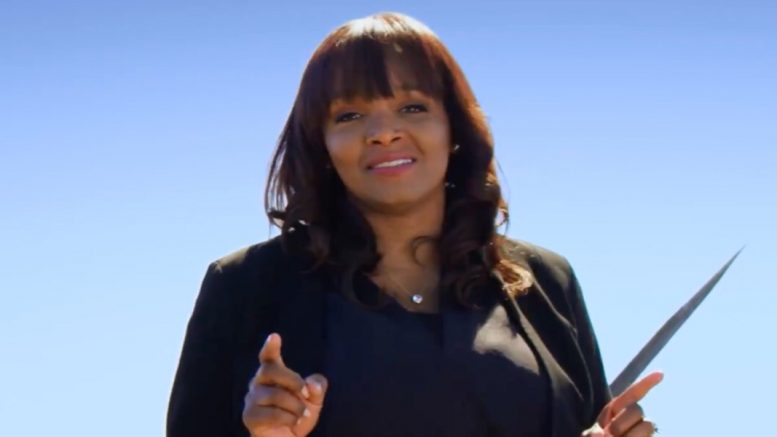 Pennsylvania Republican Kathy Barnette announced on Twitter Tuesday that she is “running to become the first Black Republican Woman elected to the US Senate.”

Barnette, who suffered defeat in her 2020 run for election to the U.S. House to represent Pennsylvania’s 4th Congressional District, shared the announcement in a video message on social media, Breitbart reported.

“I’m Kathy Barnette and I’m running to become the first Black Republican Woman elected to the US Senate. I’ll be the voice we need to defend our rights. And by the way, Joe, just because I believe in competent leadership doesn’t mean ‘I ain’t Black,’” Kathy Barnette tweeted.

Barnette’s video began with a scene from the battlefield of Gettysburg, where she explained the passage of the Emancipation Proclamation.

“The Emancipation Proclamation gave more than three million blacks their freedom,” Barnette said. “But in the decades that followed, people who look like me could not fully integrate into the fabric of this nation. We couldn’t even register to vote. Today, not only can I vote without fear of violence, but I can run for office, too.”

“But there are still deeply personal and demeaning hurdles we must overcome because now the issue isn’t just for someone who looks like me, but it’s for people who think like me, as well. People who think like me are being cancelled, bullied, fired, threatened, and de-platformed. We’re told that black lives matter, except of course, my black life because I’m a black conservative. The radicals want to control and strip not just black conservatives, but all conservatives of our identity because we dare to think for ourselves,” she said. Continued Below

Barnette also included a clip of Joe Biden when he had told host Charlamagne Tha God from “The Breakfast Club” last summer, “If you have a problem figuring out whether you’re for me or Trump, then you ain’t black.”

“The white man that sits at 1600 Pennsylvania Avenue believes he has the power to take away my blackness because I’m a conservative,” Barnette said of Biden. “But I will keep on. I will never let the words of another define me or determine my value. You can try demean me or call me names for what I believe, but Joe Biden, after the November election in 2022, you can call me something else: senator,” Barnette said.

“Because this determined Black, conservative woman is going to become the next United States Senator from the commonwealth of Pennsylvania,” she declared. “I’m Kathy Barnette, and I will not be bullied into silence.” Video Below

“Joe Biden might not think I’m Black enough because I won’t just shut up and do as I’m told. And D.C. might not be ready for me, but I’ve never been more ready for this fight,” she expressed.

“I hope you’ll join me on this journey. I can’t do it alone. Together, we will keep on and send a message to Joseph Robinette Biden Jr. that his words will not define us, that he cannot belittle us, and he cannot stop us from electing the first Black Republican woman to the Untied States Senate,” Barnette concluded.

This is what I’m talking about. All Black Lives Matter, even when you are a conservative Black woman running for office. Join @BurgessOwens, me and others in supporting @Kathy4Truth for PA US Senate! @GOP Watch her video! https://t.co/tUIQFt6Vjg