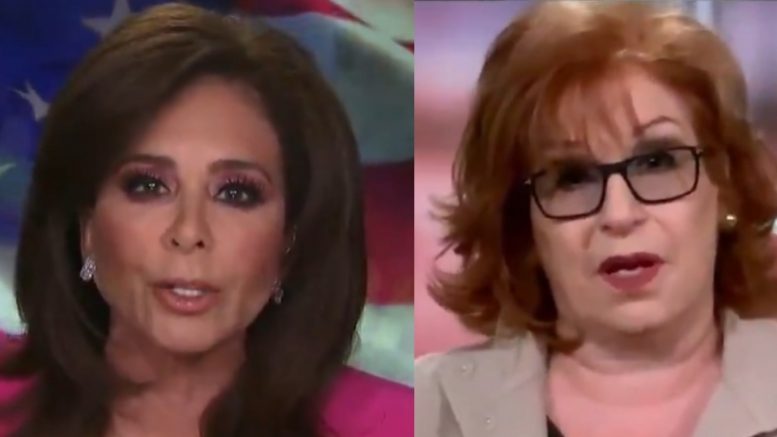 “Joy Behar — a perfect example of one who talks the talk,” Judge Jeanine Pirro said in her closing statement on Saturday, which centered around recent attacks that The View co-host made against Pirro.

Judge Jeanine faced backlash from the left after suggesting that children who are migrating to the U.S. are a “lower level of human being.”

“The bringing of these children into this country, where they will be forever connected to a cartel, is slavery,” Judge Jeanine is quoted as saying on The Five. “What we’re doing here is we are promoting a lower level of human being, who will be controlled from other countries.”

“So stop trying to make this about this is who ― not who we are,” she added. “This is about crime coming into this country and it’s a reality. And we’re losing.”

In response, Joy Behar said, “Look at what — Jeanine Pirro — this is just outrageous, Jeanine. Jeanine, I’m looking at you. You should be ashamed of yourself. She said that these kids are a lower level of human being.”

Pirro fired back on her Saturday night program by clarifying her previous marks and giving examples of how she has “walked the walk” in regards to helping displaced children who have been “trapped” into “slavery” as a result of the immigration crisis.

“I just came back from the southwest border, having interviewed people on the frontlines who say that children are being trapped by the cartels and forced into a lower level of human being,” Judge Jeanine said.

She recalled a sheriff in the area telling her that what is happening to the children can be classified as “modern day slavery — the children ultimately become slaves of the cartel.”

“20% of the children brought here have no known family in the United States,” Pirro said. “Transnational cartels seize upon them, putting them in harms way and use and abuse these young children physically and sexually, even keeping them under the cartel’s thumb once they are in the United States because they have no family here. They are then forced to continue to work for the cartel. We aren’t even taking DNA, which for these lost children would help identify them. To me, that’s placing innocent, vulnerable children in a deadly environment, forcing them to be a lower-level human.”

She went on to detail her personal experience prosecuting cases on behalf of victims, and doing what she could on her own to help children escape the situation they were forced into.

Judge Jeanine then concluded her segment by taking aim directly at Joy Behar:

“For 30 years, I helped people escape violence and I punished those who committed that violence. I didn’t talk about it. I didn’t put myself on a chair in front of a camera and yap about something. I fought, I prosecuted, I convicted, I sentenced. And when the laws weren’t strong enough, I fought to change the laws. I created task forces and provided shelters, and safe havens, connecting with churches and social services and mental health professionals.

“So instead of sitting on your butt with your friends pontificating, get down to the border, go into a courtroom, a victim center, family court, a shelter, volunteer — have the courage to step up off your comedy stage and do something that matters, that makes a difference.