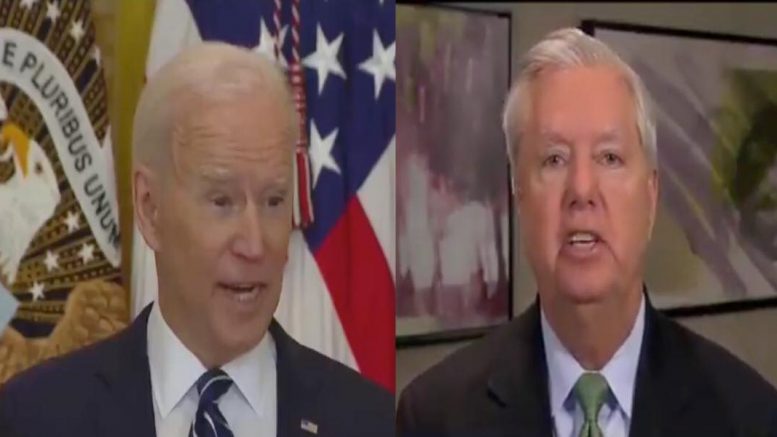 During an interview on “Fox News Sunday,” Senator Lindsey Graham (R-SC) said that is “sick” that Joe Biden is playing the “race card continuously” regarding the Republican-led Georgia election bill and the legislative filibuster.

Graham’s remark comes after Biden on Thursday, during his first White House press conference, claimed that the Georgia election law was not only “sick” but “un-American.” “What I’m worried about is how un-American this whole initiative is,” Biden said. “It’s sick, it’s sick.”

Joe Biden also called the Georgia election bill “Jim Crow in the 21st century” and an “atrocity” that had “nothing to do with decency.”

Senator Graham, however, turned the tables on Biden for claiming that policy and legislation he disagrees with are relics of racism and the Jim Crow era.

“You know what’s sick is for the president of the United States to play the race card continuously in such a hypocritical way,” Senator Graham expressed. “He said the filibuster was a relic of the Jim Crow era. Well he made an hour speech when he was a senator, suggesting that the filibuster was the best thing for the senate to make it different than the House.”

“What’s sick is H.R.1. federalizing state elections. In our Constitution, states are supposed to run elections. H.R. 1 is the biggest power grab in the history of the country. It institutionalizes ballot harvesting. It does away with the voter I.D. requirement. It will take over every election in every state. It makes the Federal Election Commission a partisan commission; it would no longer be bipartisan. So that’s the power grab we’re standing up to,” the South Carolina senator explained.

Related: Bill O’Reilly Indicates Why Joe Biden ‘Is Dangerous, And A Lot More Dangerous Than Barack Obama Was’)

“To my friends in Georgia: they had the highest turnout in the history of Georgia. We had a 150 something million people vote. So every time a Republican does anything, we’re racist, Senator Graham said.

“If you’re a white conservative, you’re a racist. If you’re a Black Republican, you’re either a prop or Uncle Tom. They use the racism card to advance a liberal agenda, and we’re tired of it. H.R. 1 is sick, not what we’re doing in Georgia,” he added. Video Below

"It's sick." Joe Biden says he is disgusted by legislation to limit voting access https://t.co/FddwPNXco8 pic.twitter.com/iIVs4MITPs