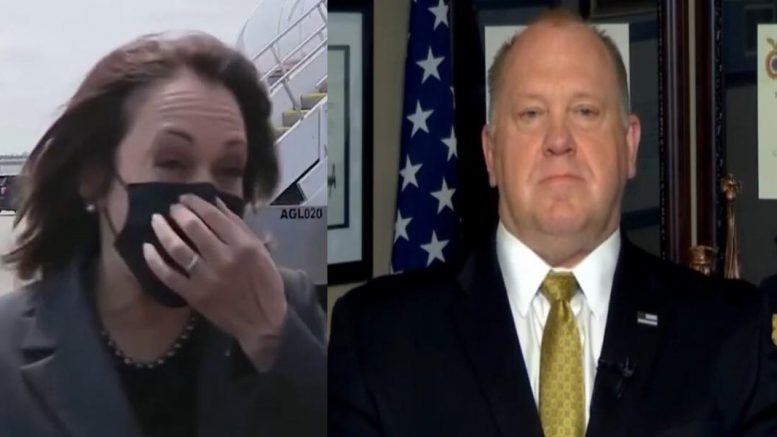 “When President Biden said she’s the most qualified, I mean, seriously? What color is the sky in his world? You couldn’t get a worst pick,” Homan expressed during an interview on Fox News.

“She supports sanctuary cities. She wrote legislation to reward those who illegally enter the United States. She vilified the men and women of the Border Patrol, saying they were mistreating immigrants,” Tom Homan detailed.

“She’s an open border advocate, she wants to abolish ICE. She compared immigration officers to the KKK during a Senate hearing, and you want to put her in charge of immigration and enforcement on the border?” Homan wondered.

“I couldn’t think of worst choice,” he said. “… The most qualified person to fix this issue– how about the chief of the United States Border Patrol, who is a great guy? He’s spent his whole career on the border. He can fix it. If you give him the power to change the policies that need to be changed and let him do his job– that’s the guy, not some politician,” the former acting ICE director recommended.

Homan predicts that Kamala will travel to Mexico and Central America to “talk to them folks”, but asked, “Why don’t you sit down and talk to the commander of the Border Patrol? Ask them their opinion. They’ve been through this before. They know how to fix this the same way President Trump fixed it.” Continued Below

“All they gotta do is one thing: If Joe Biden said today, ‘I’m gonna reestablish the Remain in Mexico program effective immediately’, border crossing will go down 75% in a 24 hour period,” Mr. Homan said.

Homan foresees it is “not going to work out well” with Kamala Harris in charge of immigration, adding, “If they would’ve stuck with the Trump playbook, Joe Biden could’ve had the most secure border in the country if he would’ve just built upon the success of President Trump”.

“But they tore everything down [involving] Trump, and this is what they got today. Again, not by accident, not by incompetence, but by design. This is what open borders looks like, and Joe Biden wins an election, sold out to the progressive left to get an open border. He knew exactly what he was doing when he made these promises,” Mr. Homan suggested. Video Below

2018: Kamala Harris travels to the border and announces support of a “complete overhaul of the agency, mission, culture, operations” of ICE and supports “starting from scratch.”

2021: Laughs off making a trip to the border, despite being Biden’s border crisis czar. pic.twitter.com/HKKtgg4ktg