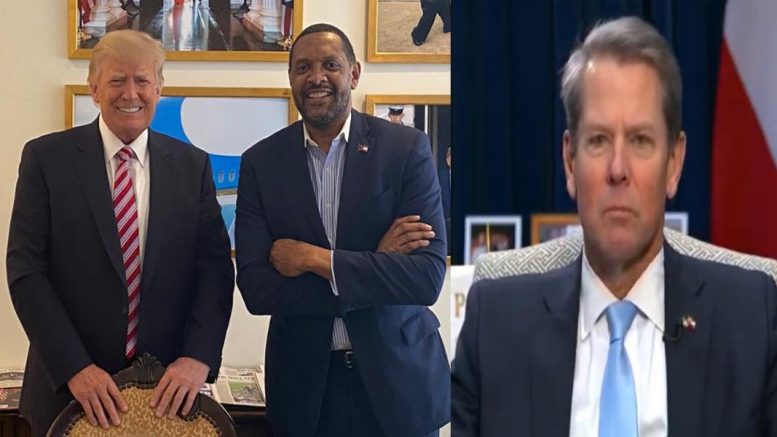 Former Georgia State Representative and lifelong Democrat who made national headlines last year when he had declared his support for President Donald Trump’s re-election, announced on Twitter Monday that he is “looking closely at Georgia’s race for Governor” to oust Governor Brian Kemp.

“I’m looking closely at Georgia’s race for Governor. If it weren’t for Brian Kemp, Donald Trump would still be President of these United States. We need courageous conservatives leading our state, not those afraid to stand up to the Radical Left,” Mr. Jones, the founder of Waking Up America expressed.

Most recently, Vernon Jones hinted at the prospects of representing Georgia when he revealed that he “enjoyed the opportunity to catch up with the President” in Florida last week and over the weekend.

Jones tweeted, “Georgia will never be a blue state. We’re going to make sure of it. Stay tuned.”

Mr. Jones posted a couple more pictures with the 45th President, writing, “Twice in one week with 45 is no Joke! Look out Georgia and look out America.”

Vernon Jones believes that “Georgia deserves bold leadership”, and noted that if he were governor of Georgia, “women’s sports would remain WOMEN’s sports. Period.”

Georgia deserves bold leadership, not cowardly leadership that buckles in the face of adversity.

If I were Governor, women’s sports would remain WOMEN’s sports.

He further pointed out:

(Related: Trump Releases A Statement Announcing His Endorsement Of Jody Hice For GA’s Secretary Of State)