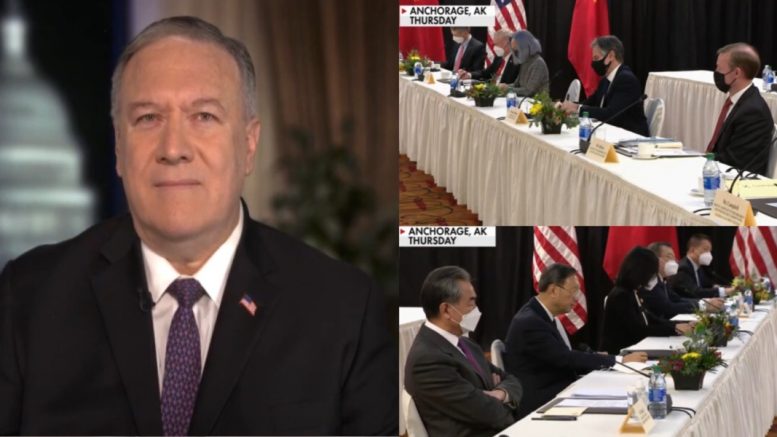 Amid testy public exchanges between the Biden administration and the Chinese Communist Party during two-day talks in Alaska this week, former Secretary of State Mike Pompeo warned that the CCP does not have good intentions during an interview on Fox News Friday evening.

“It was embarrassing, … but more importantly, it’s dangerous when the Chinese Communist Party sees weakness, perceives weakness, they’ll act just like you saw in that room in Anchorage yesterday,” Mr. Pompeo said of Secretary of State Antony Blinken’s meeting with the CCP.

“You’ve seen them now observe what the administration is doing with Iran. They’ve seen us get back into the Paris Climate Accords, an enormous gift to the Chinese Communist Party. They’ve seen us join the World Heath Organization, which gave the Chinese a complete pass for the Wuhan virus,” former Secretary of State Mike Pompeo said.

“When they sense this weakness, they’ll act just as they did: they’ll bully us, they’ll take advantage of us. We need leadership from United States that demonstrates resolve, with respect to the Chinese Communist Party, the way President Trump and our team did,” he urged.

“If we don’t do that, … we’re in an awful lot of trouble. There is a real risk. Weakness begets war, it begets hostility, and it appears that the Chinese Communist Party believes that this administration will be weak on China,” Pompeo warned.

Asked if he had been in the meeting verses Blinken, what his response would have been to the CCP, Pompeo said, “I would’ve called it out for exactly what it is. This idea somehow that if America isn’t a beacon of democracy around the world– that’s just nonsense, and it is crazy for them to make that attack”. Continued Below

“They mentioned too, you shouldn’t forget, they mentioned Black Lives Matter as part of the reason they think American democracy is in decline. Those are running buddies of Marxists Londoners all around the world. And so when they see a Democrat Party that is so deeply tied to the Black Lives Matter movement, I think they sense that America may well be in decline,” Pompeo said.

“I would’ve make clear that America stands for protecting its own. I would’ve reiterated our views about America first. We would’ve talked about the greatness and the exceptionalism of our nation, and we would’ve called them out for what they did to the world with this virus that has destroyed millions of lives. We lost millions of lives and billions of dollars worth of wealth,” he continued.

“It is unacceptable the [Biden] administration didn’t push back in that way,” Pompeo expressed. Continued Below

(Related: Mike Pompeo On Why He Believes Conservatives Should Be ‘Pipehitters’: “These 4 Years Will Test Us. Keep Grinding”)

‘I Volunteer To Serve As The Referee’: Terrell Offers After Geraldo Calls Bongino A ‘Son Of A B**ch’ On-Air

‘Which one is it?’ Dobbs on WH Official Appearing to Walk Back Biden’s Latest Taiwan Remarks