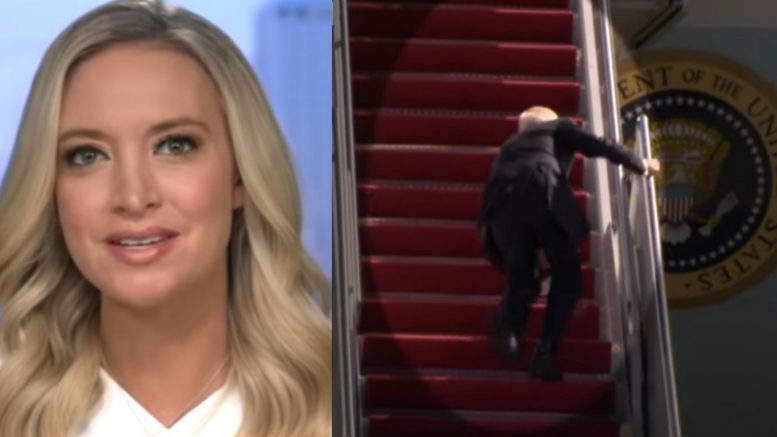 “That’s very unfortunate,” former White House press secretary McEnany said in her initial reaction to Joe Biden stumbling multiple times while walking up the stairs of Air Force One in front of the media.

White House deputy press secretary Karine Jean-Pierre on Friday blamed Joe Biden’s repeated falls on the stairs of Air Force One because “it’s pretty windy outside”. Meanwhile, Biden’s opponents have since seized the opportunity to make humor out of the situation.

Based on her own experience, McEnany said that falling down while boarding an aircraft in front of live cameras is something she feared while serving under President Trump and “certainly can happen to just about anyone.”

“I remember following the President off of Marine One and I would board those same stairs after him. And you always got a little nervous about slipping with the media watching so it certainly can happen to just about anyone,” the former press secretary told Fox News host Maria Bartiromo.

What troubles McEnany the most about the situation, however, is the media’s double standard in coverage of Biden falling versus the time when President Trump cautiously walked down a slippery ramp after delivering a speech at West Point.

“When President Trump slipped on what was a slippery ramp — my deputy press secretary Judd Deere reminded me today — it was days long-news cycle,” McEnany said.

“Literally CNN, their morning hosts brought on their chief medical expert to talk about whether it was indicative of something neurological. Their midday host brought on Chris Cillizza to talk about [Trump’s] unsteady walk and lifting of the hand. I mean, that is what President Trump got and today — at least as of a few hours ago — there was just one mention of this on CNN.”

“I think the speculation about President Trump was totally wrong and I think doing the same about Biden is totally not the way to go. But CNN – it’s just they couldn’t hide their animosity for the President along with other media outlets,” McEnany concluded. Video Below

Video Resurfaces of Sen. Schumer Claiming Nixing the Filibuster Would Be a ‘Doomsday for Democracy’