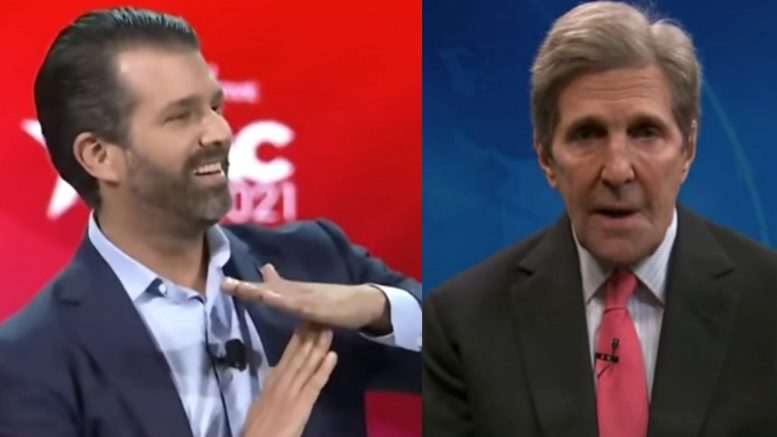 John Kerry was caught on camera without his mask on in an airplane, and Donald Trump Jr. completely pounced on it without hesitation.

Out of nowhere on Wednesday, Trump Jr. uploaded a photo on his Twitter account that convincingly appears to be Joe Biden’s Special Presidential Envoy for Climate disregarding the federal mandate requiring masks on airplanes.

It is unclear how Trump Jr. retrieved the photo, but it looks to be current — especially considering that the passenger sitting next to Kerry is seen wearing a mask as the former Democrat Presidential nominee has his mask hanging from his ear while reading, with no food or drink in front of him.

Trump Jr. tweeted the photo conjoined with the hashtag #LiberalPrivilege and captioned it:

NOTE: His mask is off & he isn’t eating or drinking. Will he be fined for breaking the law & banned from flying @AmericanAir like regular citizens would be? See Below

NOTE: His mask is off & he isn’t eating or drinking. Will he be fined for breaking the law & banned from flying @AmericanAir like regular citizens would be?#LiberalPrivilege pic.twitter.com/3j7j57jXVI

In his tweet, Trump Jr. was likely referring to American Airlines agreeing to comply with the federal mask mandate in February.

“Our mask requirement has been and will continue to be a critical component of our comprehensive effort to protect the health and well-being of our customers and team members during the pandemic,” said David Seymour, Chief Operating Officer at American, in a press release. “This federal mandate will provide additional support to our crew members who are working diligently to enforce our policy and further reinforce the safety of air travel during COVID-19.”

The press release further stated, “Consistent with U.S. government directives, individuals who refuse to wear a mask may be denied boarding, removed from the aircraft or subject to penalties under federal law, in addition to being barred from future travel with American.”

American Airlines replied to Trump Jr.’s photo just moments after it was posted. See Below

We leave you with their response.

We require masks on board our aircraft and are looking into this.

Mike Huckabee On Why Biden Officials Are ‘Specifically Staying Away’ From The Border: “They Made This Disaster”