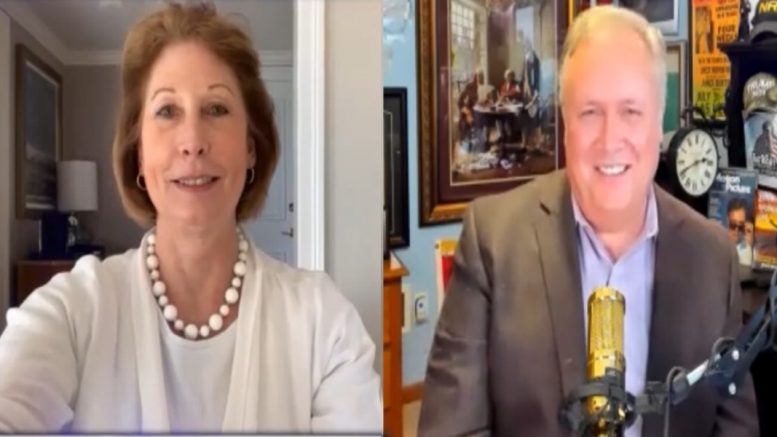 During a Thursday interview on BEK News’ “The Right Side with Doug Billings”, attorney Sidney Powell explained what could possibly happen if she prevails in some of her new legal challenges regarding the swings states from the November 2020 presidential election.

“From a legal perspective, let’s give ourselves permission to dream for a minute. Let’s say that hypothetically you prevail in some of these [cases]. And I know that Supreme Court has already thrown some of these out. But again, we’re gonna dream for moment. If you were able to categorically prove that an election– these votes were invalid, what happens then? Are there votes just discounted and the numbers retallied for the candidates? Or is there another election? What happens if we were to win and prevail on this thing?” Billings asked Powell.

“We’re definitely in unprecedented territory here,” Sidney Powell expressed. “But there are a couple of possibilities. It depends on what fraud is proven, and how it’s proven, and how determinative the actual vote count– the correct vote count could be. You know, the certainty to which you could calculate the actual intended vote count of American citizens who voted.”

“We won’t know until we get farther down the road of this, what the proper remedy is,” she said. “It could be that the Supreme Court, where it wind up, ordering a new election. That could be done promptly. It could be that states recall their electors, because of the fraud. Fraud vitiates everything. It vitiates any contract; any conduct should should be vitiated by the kind of fraud we’re seeing here. And the international interference we’re seeing with the election, is an additional issue that explains what happened.”

“So we’ve got to get further down the road,” she explained. “The main thing we need right now is actual forensic audits in the six key cities that were so plagued by fraud and counterfeit ballots. I mean, we know hundreds of thousands of counterfeit ballots were trucked to different locations. We know that there was an algorithm running the machines, probably throughout the country, not just in the key swing states, but throughout the country. It looks like there was.”

“It flipped a certain number of votes,” Powell alleged of the voting machines. “And then, there were specific instances of various local kinds of fraud that infected this election. There’s still a lot to sort out, but the opposition to going into the machines and actually counting the ballots or even testing the paper to whether it’s counterfeit, tells us that is was. I mean, just think: if these voting companies have nothing to hide, they would just say, ‘Let me show you. … Just come look. Have your cyber experts or the military or wherever, come look at this. Look at all the paper ballots'”. Continued Below

Ms. Powell noted a federal statute that “requires all federal election data and materials to be retained for 22 months”, adding, “The purpose of that statute is because we the United States of America are supposed to have the most transparent electoral system in the world so that no one has any doubt at to whether their vote has been assessed and calculated the a way that it intended it to be. And the Supreme Court authority … on one citizen, one vote.”

“We already know that there were fractionized votes. That means that in any number of places, probably across the country, pursuant to the algorithm, a vote for Joe Biden was weighed at roughly one and quarter, and a vote for Donald Trump was weighed at three-quarters. And it wasn’t just Trump. They took other races too. They fraudulently took congressional seats and Senate seats. We haven’t even gotten to dig into all of that yet,” she said.

“The personal attacks and bombshells that people are trying to throw against us who are simply seeking the truth for the American people, tells me we are spot on with what we’re alleging,” Powell expressed. Continued Below

Ms. Powell also pointed out: “We have witnessed a complete failure from all of our institutions that are supposed to protect the rule of law for the American people. And what that tells you is how powerful and moneyed-up and organized this evil is.”

Asked where do we stand in pursuit of all of this and to provide an update, what is she working on, and the best chance going forward, Powell announced, “We do have some cases that are pending. Those I cannot discuss the details of until they’re filed. But hopefully, it won’t be much longer before we get some ready to be filed.”

She said the cases pending to be filed relate to the key swing states which were contested during the 2020 presidential election.

“We definitely should win,” Powell said of her new cases if she should prevail. “Because the fraud is going to be and has been blatant. It’s going to be even more blatant when we get the rest of our information together and public in the filings.” Video Below

Sidney Powell’s full interview; her remarks which are transcribed above, begin at the 16:00 mark into the video: