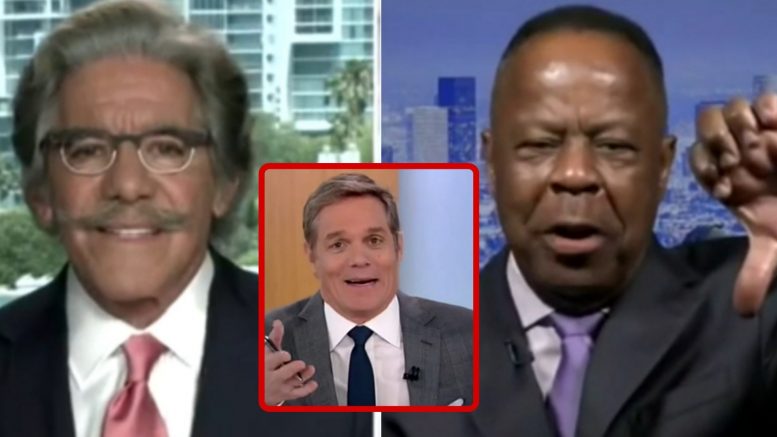 On Thursday, Fox contributor Leo Terrell — aka Leo 2.0 — let Geraldo Rivera know exactly how he felt about the prospects of him running for Ohio’s open Senate seat in 2022, as he delivered a big thumbs down to Geraldo’s face on live TV.

Rivera randomly tweeted on Wednesday that he was thinking about running for Senate after Sen. Rob Portman (R-OH) announced his retirement back in January.

Related Article: Geraldo: Trump Must Apologize For Jan. 6 ‘Before He Gets Me Back’; Instantly Gets Roasted

“Hey Leo, if Geraldo ran for the Senate, would you endorse him?” Fox News host Bill Hemmer asked Mr. Terrell with Geraldo on the same set.

“Let me be very clear about that. I’ve been dreaming about this tweet,” Terrell replied. “One, I need to hear Geraldo’s position on school choice. I need him to reinstitute Trump policies at the border. Geraldo, are you willing to answer those two questions right now with Bill Hemmer?”

Geraldo replied: “First let me give you my slogan. Geraldo for Ohio: ‘From the great river to the Great Lakes, I will fight for you. A lot of the Trump policies are policies that were also Geraldo policies.'”

“You didn’t answer the question,” Terrell fired back. “Border and school choice for everyone, yes or no?”

“I think school choice, yes. The border is more complicated though. It’s not a yes/no question,” Geraldo said.

Terrell responded with a lingering thumbs down and said, “There it is.” Video Below

AZ Sen. Rogers Issues a Statement In Response To People Who Are ‘Frustrated’ Over Audit Delays