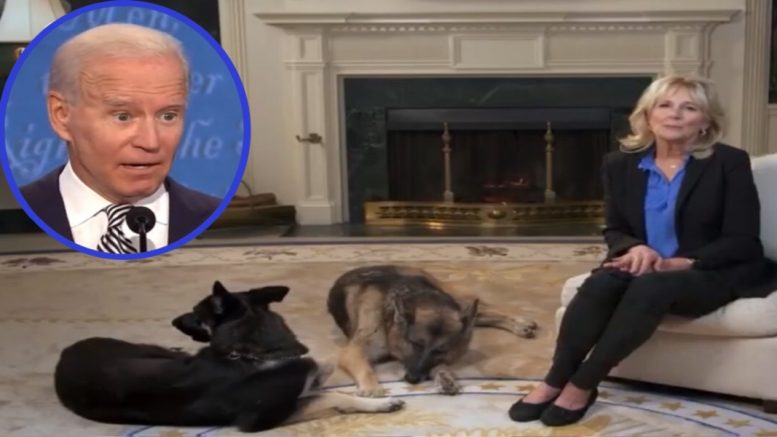 White House press secretary Jen Psaki said Tuesday that the first family’s German shepherds remained “beloved members” of the White House family amid reports that the two dogs had been relocated to Delaware following aggressive behavior from one of them.

In an MSNBC interview Tuesday morning, White House press secretary Jen Psaki was asked about a CNN report from earlier in the day that the dogs, Champ and Major, were back at the Bidens’ family home after a “biting incident” between Major, the younger of the two dogs, and a member of White House security, Politico reported.

“But what I can tell you, as a dog lover– I know you are– is that Major and Champ are part of the Bidens’ family. They’re members of the family,” she said. “They often go to Delaware when the first lady is traveling. And they’re adjusting to their new home.”

Psaki added: “I just know that they’re beloved members of the family and, of course, of the White House family, too.”

Biden adopted the 3-year-old Major from the Delaware Humane Association in 2018 after fostering him as a puppy. Major is the first shelter dog to occupy the White House. 13-year-old Champ, the elder of the two dogs, joined the family in 2008 shortly after Joe Biden was elected vice president, noted Politico. Continued Below

Cory Topel at the Delaware Humane Association tells TMZ … Champ and Major’s recent behavior could stem from a change in environment, which can be unsettling for dogs. She added, “it can take any dog some time to adjust to a new home or new surroundings.”

Topel continued, “This is particularly challenging in a home like the White House, with dozens of staff and new people in the environment and around the dogs every day.” Topel added, “this does not mean that Major — or any shelter dog for that matter — is an aggressive dog.” Continued Below

Major and Champ won’t be kept away from the White House for too long. The dogs will reportedly be back. A White House official told NBC News, “With the First Lady traveling for three days, Champ and Major went to Delaware to stay with family friends.”

Rep. Jim Jordan (R-OH) appeared to troll Joe Biden with a picture of the 45th President with Conan. Conan was honored at the White House for its role in the the operation that killed Isis leader Abu Bakr al-Baghdadi in 2019.

Newmax’s Greg Kelly also commented on the situation over the dogs at the White House:

They shipped the DOGS out of the White House. They are blaming Major’s “aggressive” behavior. Probably just didn’t like his TAIL being pulled by ⁦@JoeBiden⁩ pic.twitter.com/ioCmdZVg3r

“Doctor” Jill Biden with Champ. She was really laying on thick with that dog. I mean, she went from Zero To a Hundred in terms of Dog Activity. Nobody was buying it. Especially the Dogs! pic.twitter.com/prmzNf2PSf

Neither DOG nor “Doctor” Biden seemed to be enjoying this awkward Petting of the Head. pic.twitter.com/1Nti0x8c9N

Related: Pres Trump On Why He Didn’t Inform All Congressional Leaders About Plan To Raid Baghdadi: ‘Washington Is A Leaking Machine’)

ABC Reporter Asks ‘Why Do You Keep Calling This The Chinese Virus?’ Trump Reacts: “It Comes From China, I Want To Be Accurate”